“Queer” is an interesting word. It can be used as a noun, an adjective, a gender identity, or a sexual orientation. But what if “queer” were to be used as a verb? What does it mean to “queer” something, and how do you do it?

Defining Queer as a Verb

Dr. Charlie Glickman, a sexuality educator, and writer provides an in-depth look at the history and variety of the word “queer” in order to define it today.

“To queer something […] is to take a look at its foundations and question them. […] To queer is to examine our assumptions and decide which of them we want to keep, change, discard, or play with.”

To this point, “queering” is necessary for paving the path to our future. As an action, queering discards outdated assumptions, allowing better, more inclusive ideas to replace them. In other words, it is a deliberate process of identifying and rejecting any preconceptions we have so as to make way for more nuanced views.

The act of queering takes practice. For example, each time we discover a new image or read a new piece of writing, we can queer it. In this way, it is an ongoing process, affected by our relationships with ourselves and those around us.

The idea of “queering” something is rooted in oppression. Since obvious representation was not always an option, LGBTQ+-identifying people had to find it in heteronormative works.

“Queer and trans people are constantly navigating our way through systems and structures that are not necessarily built for us (or are built to privilege some of us – white, cis, able bodied people – over everyone else).”

Though, queering isn’t just for members of the LGBTQ+ community. In fact, Dr. Glickman considers queer in terms of one’s worldly outlook and choices, not by who they have sex with. In such a way, he claims that the act of queering is shaped by one’s relationship with the subject and their ability to hold two opposing ideas in their head.

Following that, one obstacle we can face when queering is the tendency to align with pre-existing categories. It can be hard (and scary) to challenge social norms and consider two seemingly contradictory things in relation to each other, like religion and homosexuality, for example. This is precisely the essence of queering, though!

“The test of a first rate intelligence is the ability to hold two opposed ideas in the mind at the same time, and still retain the ability to function.”

This quote from F. Scott Fitzgerald captures this idea perfectly. While it is hard to grasp two conflicting views, it is necessary for the successful queering of a work.

At the University of San Francisco (USF), Rabbi Camille Angel is teaching students how to queer, specifically in a religious context. As a lesbian and church official, Rabbi Angel invites students of all religions and sexualities to join her in creating an inclusive space on campus. Following her leadership role in the congregation Sha’ar Zahav, her class “Queering Religion” focuses on reevaluating religious writings in a way that celebrates queerness.

“It’s not, to me, the words in the text. It’s who brings those words out and uses them as weapons that we have to find ways to interrupt and repair.”

Rabbi Angel’s course, “Queering Religion”, was the first class at USF to include the word “queer” in its title. In it, she uses informative readings and guest speakers to exemplify the importance of queering. Due to USF being a Jesuit university, Rabbi Angel has found many opportunities to expand and challenge religious ideas about the LGBTQ+ community in her role.

Queering is even showing up on Twitter! Here are some examples of everyday queering:

It’s a practice, but once you start, it’ll be hard to stop. So, go start queering! 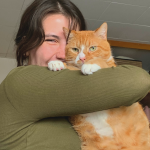