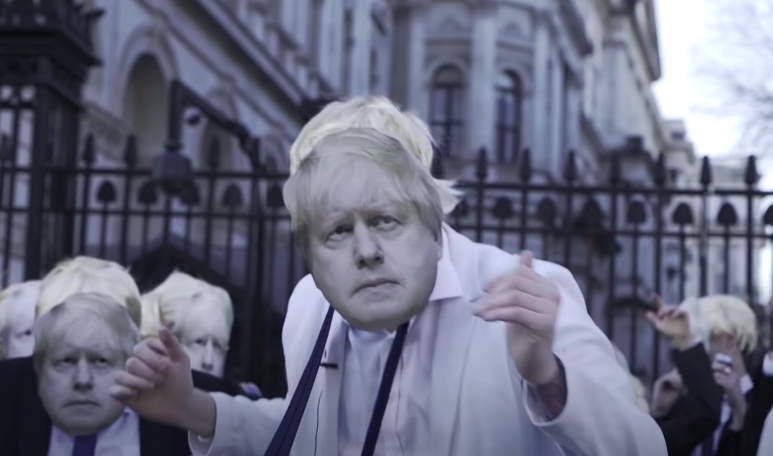 Members of the public are viciously disappointed, angered, and fed-up, yet not completely shocked, as leaked pictures have shown that parties have been held illegally in Downing Street when the rest of the population were stuck at home, unable to spend final moments with lost loved ones, nor attending their funerals.

Johnson has become the latest popular meme, as per the natural internet response, with many remixes of popular songs being made to criticize the politician and generally, take the piss out of him.

Whilst many have called for the incompetent PM to resign, he seems to be planting his feet firmly on the ground, and generally making life a bit of a nightmare for everyone by refusing to step down. Maybe he has the ‘if I’m going down you’re all going down with me’ kind of complex.

In response to the parties and the government’s poor handling of the situation, 10 Downing Street found itself surrounded by Boris Johnson cosplayers who decided that, if they can party on one side of the gate, well, then why couldn’t they party on the other? Whilst the stunt has been a popular topic across various news sites, an interesting update has taken place as the man behind the event, YouTuber Jack Dean (known as jaackmaate on the platform) has uploaded a video documenting the whole thing.

Armed with Boris masks, shoddy blonde wigs, and a lot of booze, the group can be seen chanting retorts such as “This is a work event” mocking the PM’s ridiculous attempt to justify the breaking of lockdown rules. Dean has said in the video that the stunt was in retaliation to the government’s clear indication that they believe themselves above the very rules they set for others, and the lack of accountability being taken by them.

The video is hilarious and makes its point clearer than the government covid guidelines in the UK ever did, and you can watch the splendor below.