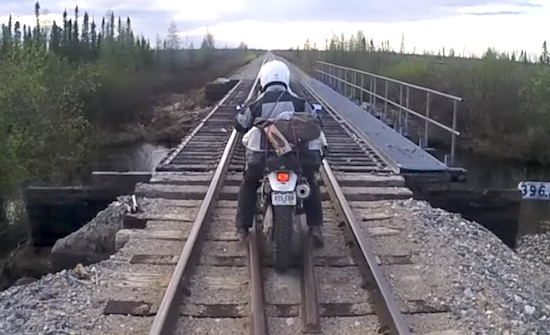 Two men decided to go off-roading and, instead of heeding the axiom of “Don’t play on the railroad bridge, or you’ll get hurt” which many mothers impart on their children, they instead chose to ignore that sentiment.

This potentially foolhardy decision almost landed one of the bikers on some crushed rock and hard-packed sand. Luckily, the biker was able to hold the motorcycle up with his weight and a couple of sensitive organs (I’ll let the video give you the exact colorful term used); he was also able to remove himself and the bike from harm’s way with the help of his fellow rider.

The Dirt-bike rider in distress expressed his regret by claiming that he should have tested the board before rolling over it with a weighty motorcycle. Although the railroad tie was not fastened properly around the board, the second biker did a fine job of tying a rope around the handlebars to keep the bike in place.

After the cycle was properly harnessed to the bridge, the fallen biker pulled himself out from the crevice and the two worked gingerly to lower the bike to the ground. You can catch the video below to get a scope of the difficult process these two riders faced, which was shot on the second biker’s GoPro.

If you would like to discover more about people placing themselves in dangerous situations, try Phelps vs Shark: Coming Up This Shark Week on for size.

In this article:biking, pad, Videos 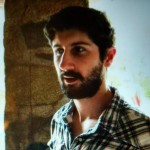