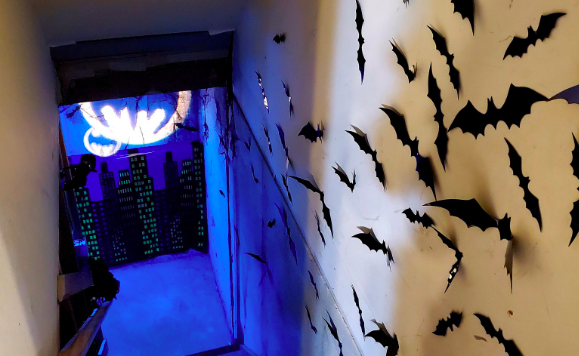 32-year-old Sim Mularkey wasn’t allowed a Batman-themed birthday party as a child. The reason? “Batman was for boys.” Years later, her boyfriend planned the ultimate Batman-themed party for her 32nd birthday.

Mularkey had always joked she’d have the Batman party of her dreams when she turned 32, but when the time came, she forgot. Having worked a full day, Mularkey had even ‘forgotten about [her] own birthday’ due to being ‘exhausted from work and life,’ she said in a tweet. Luckily, her boyfriend, Johnny Weissgerber hadn’t forgotten about her childhood dreams.

Mularkey may have thought she was coming home to a quiet dinner to celebrate, but Weissgerber had other plans up his sleeve. Weissgerber, an artist and actor, had the skills to pull off a truly spectacular Batman-themed birthday party.

How did Weissgerber produce the best Batman-themed party?

For decorations, Weissgerber filled their home with Gotham-style decor – from tons of bats pinned to the walls to a bat-signal projected around the house. A photo booth was present, with Batman-themed props and costumes for party-goers to get into the spirit with.

Decor wasn’t the only way Weissgerber brought Mularkey’s dream to life. There were Batman cupcakes, cakes and cocktails. Plus, Weissgerber set up different games, all with a Batman twist. In one corner, a ‘Pin the Nippples on the Batman’ game, in another, ‘Bane’s Beer Pong Blitz.’ To top it all off, Weissgerber formulated a Riddler-themed scavenger hunt, with riddles hidden around the house.

A particular stand out for Mularkey was the Joker Batarang challenge. This saw guests trying to throw a baterang at a stand, without popping any of the surrounding balloon – all of which were full of Joker gas, naturally.

How did Mularkey react?

Impressively, Weissgerber managed to keep the party a complete secret from Mularkey. She described her shock to LadBible, saying:

I was told that my initial reaction started with confusion and then it visibly morphed from confusion to understanding to ‘M-My B-Batm-man b-birthd-day part-ty???!’ and then I started SOBBING. He remembered! He knew! It was finally happening!

Many online found the story heartwarming, with Mularkey’s initial tweet gaining 224.5K likes as of now.

For other feel-good stories, why not read about this Utah wildlife bridge, which is helping to save animals’ lives?