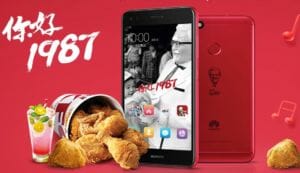 KFC has been bringing 11 secret herbs and spices of goodness to China for 30 years, and decided it was time to celebrate. In another wild marketing move, they’ve paired up with the Chinese technology company, Huawei to bring customers an anniversary-themed smartphone.

They come with: a snazzy KFC music app that can play music at the restaurants, 100,000 K-dollars for buying chicken,

and a smiling Colonel Sanders printed on the back of of each case.

You can get them though Tmall for about $162. They’re only making 5,000, so if can read Chinese and want to get in on miracle of a phone, you’ll have to move fast.

You can watch the ad they released here:

If you want to see some more of KFC’s commercial antics, then you should check out their sunscreen.