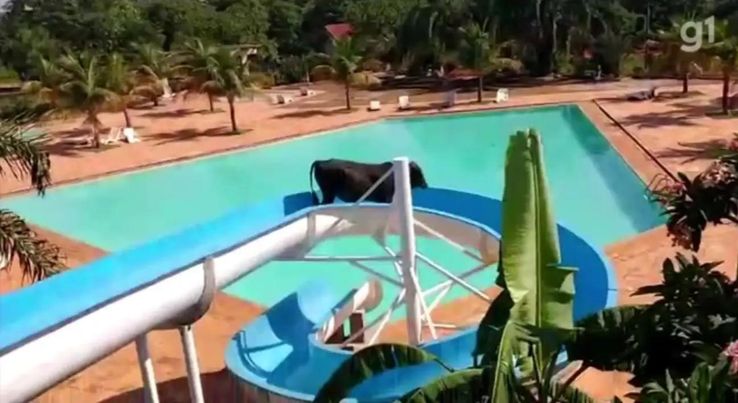 A cow in Brazil has recently been filmed sliding down a waterslide after escaping from a farm all the while evading slaughter in the process.

The cow escaped from a ranch located 500 miles west of Brazil’s capital before it entered a nearby water park, the Indaiá Clube in Nova Granada. However, this isn’t the first time cows have tried to evade slaughter. In June 36 cows ran away from a slaughterhouse and through Pico Rivera, California.

Once inside the waterpark the cow proceeded to climb eleven steps according to GI before being spotted not very gracefully sliding down towards the water below, much to the horror of the country club’s president.

Joȃo Luiz Andrade Zevole was fearful that ‘ the waterslide wouldn’t hold’ as weighing in at 500lbs the cow exceeded the slides weight limit by 60lbs. Speaking to El Diario de Regiao he said that the rogue cow ‘looked at [him] before slipping down the slide.’

He continued: ‘I called some people from the city hall who were working in front of the club to help me, I called and they didn’t believe it, they thought I was kidding.’

The Sun has reported that after some time, people came to the cow’s rescue by tying it up and encouraging it to slide into the water before it was placed safely back on dry land.

Since the video circulated the cow’s owner Carlos Miguel Serante has come to a decision about its fate.

He said: ‘ Someone came to tell me he had climbed on top of the waterslide. I didn’t believe it. We followed, took him away and showed me the video of him in the pool. I didn’t think he would go up.’

Thankfully we can report that the cow was spared and has since been kept as a pet. He has been named Tobogã which unsurprisingly means ‘slide’ in Portuguese.

Unlike pigs, it seems that cow’s really do fly (down waterslides anyway).