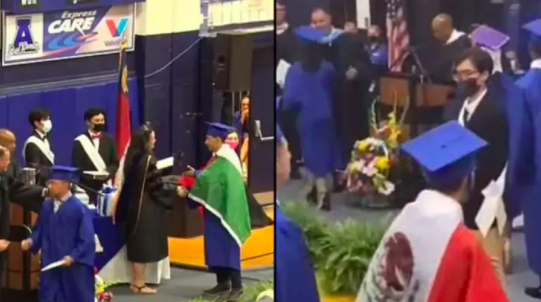 North Carolina student Ever Lopez was denied his diploma at a graduation ceremony last week for wearing the Mexican flag over his gown.

Lopez, 18, draped the flag over his blue gown at Asheboro High School’s graduation ceremony, where he was to become the first member of his immediate family to earn his high school diploma.

The video, captured by his cousin Adolfo Hurtado, shows Lopez lining up for his Diploma, before being stopped by the principle. When the crowd notice what’s going on the cheers quickly turn to boos.

In an interview with ABC News, Lopez recalled the moment the principle approached him: “When I got up there I went for the handshake and I wasn’t thinking nothing of it and I heard her say, ‘You can’t wear that’, and I was in shock and confused. I was like, ‘What?’ She was like, ‘The flag. You can’t wear that.’”

In a second video, Asheboro’s principle Penny Crooks, can be seen telling Lopez he would not be able to receive his diploma. As Lopez’s family raises their concerns, Crooks tells them they ‘can come back tomorrow’ before they are escorted out of the building.

“Sadly, he did not get his diploma,” Hurtado said, “the teacher wants him to apologise – obviously he’s not going to do that.”

In a statement released on the school’s website, they explained they ‘strongly support our students’ expressions of their heritage in the appropriate time and place’ but added that wearing a flag during graduation is a violation of the dress code.’

They continued their explanation by stating that it was only mortar boards (graduation caps) that students were permitted to decorate and was the ONLY acceptable deviation from the traditional blue cap and gown.

Mr Lopez, who was born in the US to Mexican immigrant parents, says he wore the flag as a recognition of his family’s sacrifices and struggles.

“It means everything to me,” Mr Lopez said of the Mexican flag in an interview with ABC News. “My parents, my whole family, is from over there. I did it for them because they had a rough childhood; they didn’t get the scholarship that I got, or they didn’t get to go to school like I did. So… representing my flag and getting a diploma was really important to me because I was basically doing it for my family.”

Ever’s mother, Margarita Lopez, asked for an apology following the school’s actions. “To me, this was an act of racism, not just to my son but to the entire Hispanic community,” she noted.

More than 100,000 people signed an online petition to allow Ever to receive his diploma – which he was able to collect on Monday, four days after his graduation ceremony.