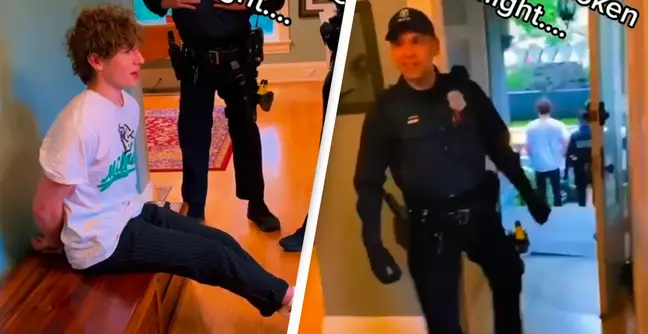 A teenager faced a rude awakening the morning after breaking into an AirBnB filled with police officers.

After traveling to Milwaukee, Wisconsin for special law enforcement training, several Montana sheriff’s deputies settled in a rented house to get some sleep before their work began.

Throughout the night the officers heard some noise, but assumed nothing: that is, until the next morning, when they saw an open AirBnB door.

In a video posted to TikTok by Deputy Charles Pesola, officers explained they searched the house and found the 19-year-old fast asleep.

Pesola commented, “This silly guy found the one Airbnb in all of downtown Milwaukee, Wisconsin, loaded with cops.”

The Montana officers called Milwaukee Police Department to come and deal with their intruder, with footage showing the local police in disbelief as they heard about the situation.

The teenager did not end up facing charges, with authorities saying he stumbled into the wrong home.

Deputy Matt Vander Ark commented, ‘He made a mistake. It’s OK. We’re gonna get over it, and at the end of the day, we can smile about it.’

The officer said he made the video to show people “ we’re still having fun and still real people and we’re good, it’s a good thing.”