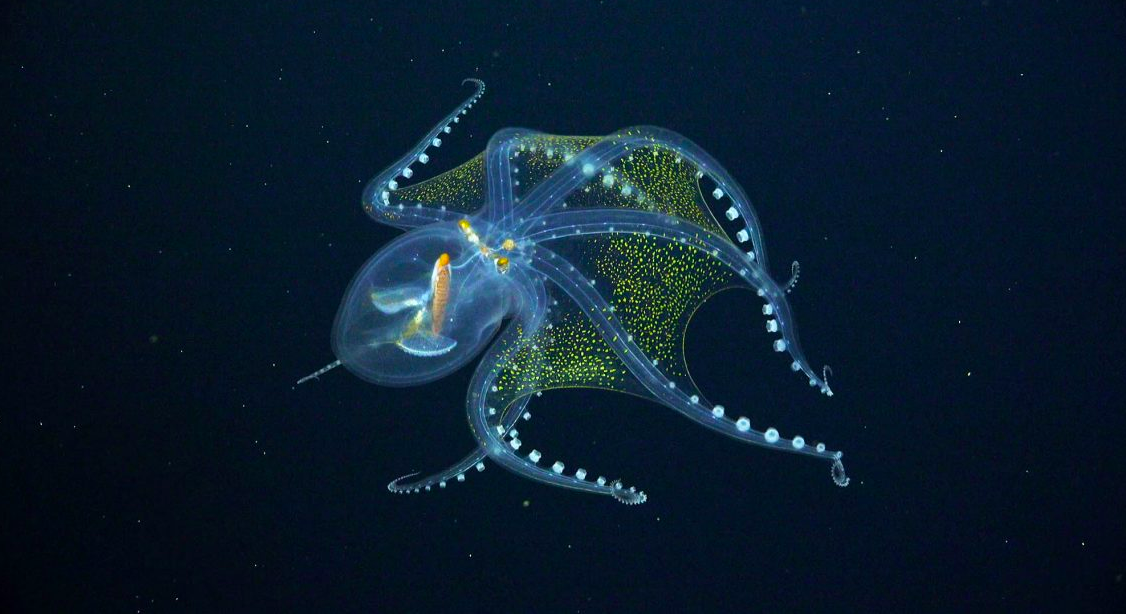 During a groundbreaking expedition in the Central Pacific Ocean, scientists caught on camera, an incredibly rare ‘glass octopus’.

Marine scientists of the Schmidt Ocean Institute spent 34 days aboard a research vessel, Falkor, exploring the Phoenix Islands archipelago. This expedition has been in motion since about 2017, in which the scientists have finally made record of an outstanding species.

The scientists conducted camera exploration of five seamonts, as well as 30,000 kilometers of high resolution sea floor mapping. This research was described as, ‘the most comprehensive study of deep sea coral and sponge ecosystems in this part of the world.’

Expedition Chief Scientist Dr. Randi Rotjan of Boston University had this to say about the research:

‘It has been very inspiring to help document the biodiversity of unexplored seamounts on the high seas and in U.S. waters.

We’re at the beginning of the UN Decade of Ocean Science for Sustainable Development, so now is the time to think about conservation broadly across all oceanscapes, and the maps, footage, and data we have collected will hopefully help to inform policy and management in decision making around new high seas protected areas.’

Scientists made sightings of this incredibly rare and almost transparent octopus that only displayed three features: eyeballs, digestive tract, the and optic nerve.

Up until now, the live recording of this animal had been limited because it is so rare. This animal has mainly been studied through the gut contents its predators.

Executive Director of the Schmidt Institute, Dr. Jyotika Virmani said this about the expedition:

‘Working with scientists and local researchers, this expedition is a remarkable example of the frontiers of science and exploration that we are able to support.

‘Live-streaming the dives gives us a glimpse of rarely seen and fascinating creatures such as the transparent glass octopus.

‘By providing this platform to further the understanding of our ocean, we trigger the imagination while helping to push forward scientific insights and the protection of our underwater world.‘

This type of research aims to define the genesis of adaptive immunity that could potentially be used in medical research for drug delivery, cancer immunotherapies, and enhanced vaccine efficacy.

Check out how being near bodies of water can improve your well being.