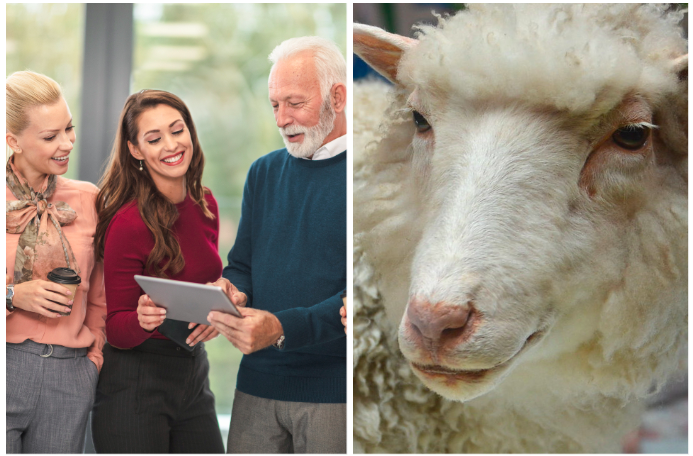 Twenty-five years on from the momentous occasion when Dolly the sheep, the first mammal cloned from an adult cell, was cloned conspiracy theorists don’t believe scientists are finished. It has recently been speculated that humans themselves are now being cloned.

Dolly was born in Scotland on 5 July 1996. She was cloned by a team that included the biologist Keith Campbell, embryologist Ian Wilmut, and other members of the Roslin Institute which is part of the University of Edinburgh.

Arguably the world’s most famous sheep, Dolly came to exist following a process that saw her cloned from an adult somatic cell by nuclear transfer. Want to know more about this process? Then keep scrolling to find out.

Going back to the very start, Dolly had three different mothers. One provided an egg, the second her DNA, and the third carried the cloned embryo.

The process by which she was created is known as somatic cell nuclear transfer. A bit of a mouthful right? This essentially occurs when a cell nucleus from an adult cell is transferred into an unfertilised developing egg cell which has had its own cell nucleus removed.

The hybrid cell then proceeds to be given an electric shock to help it divide and then develops into a blastocyst, before being implanted into the surrogate.

Sadly, Dolly only lived until her seventh birthday as she was put down on 14 February 2003 due to a progressive lung disease on top of arthritis. Nonetheless, it is thought that the disease was in no way related to her being a clone. Despite her short life Dolly successfully gave birth to six lambs with a Welsh Mountain ram.

With the current focus now very much on humans, it has caused debates internet wide. Live Science have since commented that despite the cloning of humans being ‘unethical’ it is in fact possible thanks to science.

Recent discussions led one Reddit user to ask ‘ What conspiracy theory do you fully believe is true?’

Another user replied: ‘ Human cloning has already been done or attempted. We cloned a sheep named Dolly in 1996, and humans aren’t that much different to sheep in their early blastocyst or embryonic development. Some government agency has probably cloned a human and are watching over that person right now.’

This reply received over 6,700 likes and around 500 responses which shows people really want to know about this stuff!

One reply stated: ‘ They publicly talked about cloning monkeys not too long ago and even about making  a genetic chimera with human DNA, which they killed early in development. So yah. For sure.’

Whatever your stance on the debate is is an interesting one for sure. Who knows maybe we might see our cloned selves walking the streets in the distant future?