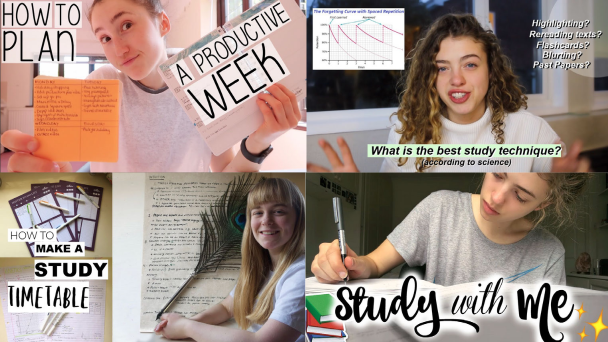 With the start of term time looming large for university students, many will be looking for advice on how to study better and get the grades they want. Luckily, there is an entire side of YouTube dedicated to all things related to studying: StudyTube. From organizing notes to time management, StudyTubers offer advice-filled videos to inspire students and help them excel academically. On the surface, it seems like a gold mine for anyone who needs motivation or guidance with university work. However, on closer inspection, StudyTube seems to be more harmful than helpful.

Studytube is a community on YouTube centered around studying tips and motivation. It is mainly populated by University students who post content ranging from ‘top tip’ videos to vlog-style ‘study-with-me’s. Some of the most popular StudyTubers include Unjaded Jade, Ruby Granger, Holly Gabrielle, and StudyQuill.

With lecturers and teachers constantly reminding students to revise but perhaps failing to give them suitable methods, it’s unsurprising that many students turn to StudyTube for advice. These creators offer guidance on revision techniques, note-taking, and how to use your time productively, which, as many commenters write, are a lifesaver. Also, these creators are the same age and in the same situation as their audience, making them relatable and easier to take advice from than someone past university age.

Another reason StudyTube is so popular is that these content creators serve as role models. They’re a good influence, promoting how important putting in time and effort to studying is, whilst also romanticizing studying to make it less of a dreaded chore. Ruby Granger makes her ‘study with me’ videos aesthetically pleasing and calming, with candles, classical music, and soft lighting.  For many viewers, StudyTubers give them a much-needed boost of motivation and inspire them to study more effectively.

How Can Such A Helpful Side Of YouTube Be So Toxic?

It might be hard to fathom how a side of YouTube that is entirely dedicated to giving recommendations for better studying habits could be toxic and detrimental to mental health. But behind videos filled with perfectly highlighted notes, neat flashcards, and encouraging words of wisdom lurks a dark side.

One aspect of these creators that is criticized is their extreme ‘study with me’ videos, which range from 8-hours to 12-hours in a single day.  These videos often feature getting up at 5 AM, then cramming in as much revising and note taking as possible, on top of numerous other activities such as working out.  There are even vlogs showing these creators studying on Christmas or after bouts of insomnia. Such excessive study sessions promote that this is the ‘perfect’ and best way to study and that doing any less just isn’t enough. Students feel pressure to work these insane hours to achieve top grades, just like their favorite StudyTuber did.

Comment sections are full of people expressing guilt and shame as they compare their own study habits to these creators. One commenter on a video of a 12-hour study day said they are doing “7 hours a day but I feel like it’s not enough and my mind is blank”. This ‘compare and despair’ trap causes students to become discouraged and deflated, rather than encouraged or inspired.

Study habits like this also promote extreme perfectionism, where nothing but the longest study session or the best grades are acceptable. Certain StudyTubers have received backlash for their reactions to getting a ‘bad’ grade, which is usually a perfectly acceptable result to get. Ruby Granger faced criticism on her video reacting to her first university grade, where she shed tears over a high 2:2. She states that she “did so badly” and the essay was a “complete waste of time”. This normalizes extreme perfectionism and a belief that high grades are expected even when it’s a student’s first attempt at a university essay.

Another criticism of the StudyTuber community is that their videos portray a toxic ideal of productivity. Toxic productivity, which has become a massive issue over lockdown, is an obsession with self-improvement. In this case, it’s an obsession with attaining high academic results and studying as much as humanly possible. With StudyTubers filming themselves studying ridiculous hours with few breaks, this fuels the idea that being productive all the time is the only real way to succeed in an academic environment. This belief is incredibly dangerous, as being productive in every situation is an unachievable goal. Trying to be productive all the time leads to burnout and self-shaming when a person feels they haven’t ‘done enough’.

StudyTube can be an inclusive place that guides, supports, and advises students that may be struggling with their academic circumstances. But sadly, its negatives outweigh its positives. The actual helpful videos and more realistic StudyTubers are a drop in the ocean among the sea of videos suggesting that a persons’ worth is defined by productivity or grades. StudyTube has bred a toxic culture surrounding productivity, further pressurizing already stressed students to push themselves beyond their limits just to get a better grade.