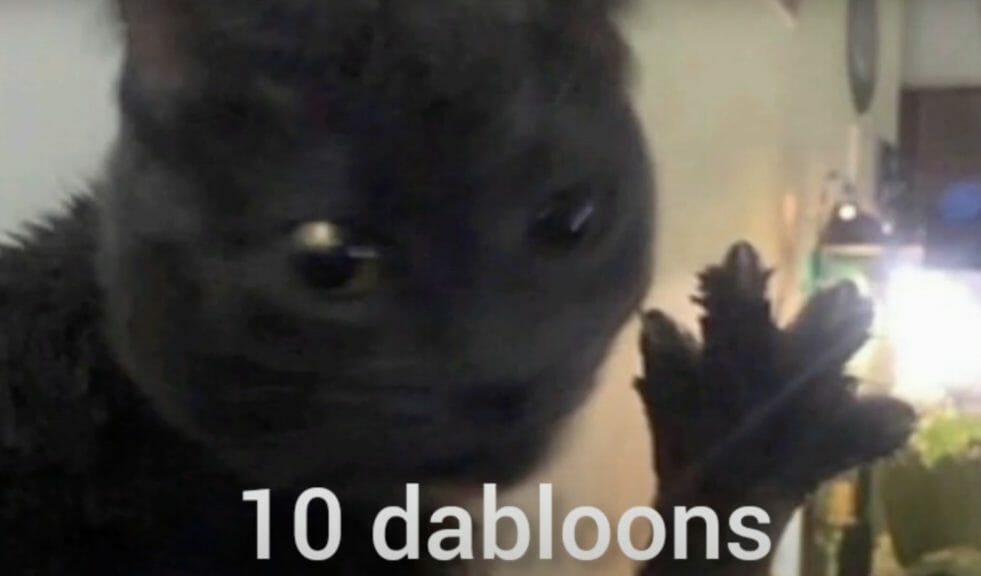 How have a cat and doubloons created a viral TikTok meme and a new economy?

Over the past week, many TikTok users have been haunted by images of a black cat, requesting four doubloons (called ‘dabloons’ on TikTok) in exchange for random goods. What started as a silly meme on TikTok has now developed into a virtual economy with a housing market and a severe rich-poor gap. What is the ‘dabloon’ meme on Tiktok, and has it created a functional, virtual economy?

The ‘Dabloon’ Meme on TikTok started small, using TikTok’s slideshow function. The original meme had a black cat approach you as a ‘traveler’ and give you a food-based good, such as soup. The slide show typically ended with an image of the cat holding up four fingers and requesting four ‘dabloons’ (meaning doubloons — a Spanish gold coin) in return for the goods given. This meme gave rise to a few adjacent ones in which people were given ‘dabloons’ to spend on goods. People’s ‘For You’ pages differed in how these memes were viewed. As a result, people began to joke about how they were rich or in ‘dabloon’ debt. Little did the TikTok community know how much more this meme would develop.

Soon, the development of the ‘dabloon’ meme increased tenfold. In reference to the meme: TikTok users created virtual shops, realtors, banks, and insurance companies that use ‘dabloons’ as currency. These places allowed people to spend their ‘dabloons’ in several ways or to take out ‘dabloon’ loans. Soon, people began making thievery schemes for ‘dabloons’, and the FBI and ‘dabloon’ police were created to manage the situation further. Some viewed this as a fun way to mess around with the fake currency. However, others were focused on the serious issues present in what they deemed ‘the dabloon economy.’

With worries about inflation in the economy, those in the ‘dabloon’ economy soon saw a terrible rich-poor gap develop. TikTok users saw those with few ‘dabloons’ going further and further into debt. On the other hand, those with many ‘dabloons’ gained infinite amounts of the currency. Soon, chaos ensued — as the ‘dabloon’ community had a ‘purge’. This is in reference to the horror movie series The Purge. In this franchise, for twelve hours, all crimes become legal. Combined with a black market and a rebellion, a silly meme in which a traveler was given soup has become a troubled economy mixed with complete anarchy.

Is the ‘Dabloon’ Economy a Functioning One?

Though it is currently in anarchy, is the ‘dabloon’ economy a functioning economy? Surprisingly, yes. With its own job network presented through the insurance companies, shops, and realty, the ‘dabloon’ economy functions as an economy. The exchange of goods with currency (‘dabloons’) only furthers this conclusion. While the economy has its issues, the poor-rich gap and inflation, these are common issues that economies face.

The ‘dabloons’ TikTok meme created an economy, and people are stressed about their finances. Other users are even creating cat personas in order to participate. What have we learned from the ‘dabloons’ meme? Gen-Z can take memes too far — to the point of creating an economy.