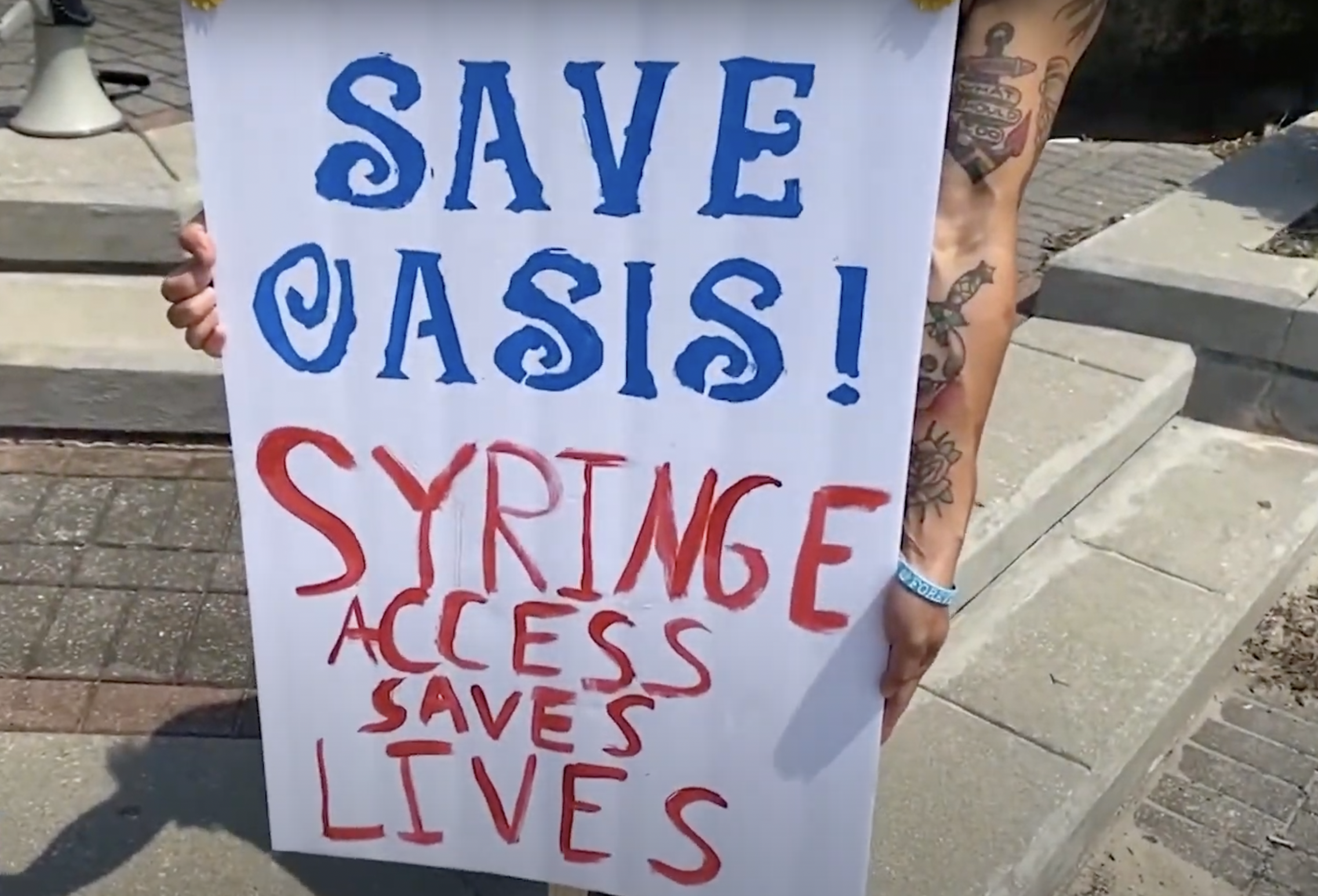 The streets of New Jersey’s Atlantic City filled with protesters across the month of September and October in efforts to protect the city’s only needle exchange center.

In July of 2021, Atlantic City council members and lawmakers voted 7-2 in favor of defunding and shutting down the city’s needle exchange program in the midst of one of the country’s most severe increases in overdose- and drug-related deaths. This action was taken despite the urgent pleas of both the city’s own health director and many experts and protesters in the area.

Atlantic City local Darlene McCormick, who once used the resources available at Oasis, spoke at the vigil, “I needed to go to survive. It’s about survival. This is our life and death. It’s not a joke.”

The South Jersey AIDS Alliance/Oasis Drop In Center, known as Oasis to locals, has been providing the city with drug safety related resources for the past 14 years. At Oasis, visitors can access clean needles, the overdose-reversing drug naloxone, treatment for drug addiction and dependence, general health screening and treatment, and HIV testing, a resource which has been critical to the city’s public health after Atlantic City shut down public access HIV tests in 2015.

Oasis offers dozens of resources to support those using and addicted to drugs, including testing strips to detect the presence of fentanyl, safe sex information, first aid care for abscesses that often occur at injection sites, drug-addiction treatment medication, and HIV, HCV, and STI tests and treatment.

Oasis is one of only seven of these sites in New Jersey and is the oldest and largest of the kind in the state, serving approximately 1,200 people each year. It is situated in one of the state’s highest locales of HIV positive residents, 45% of whom report suspected drug use as the source of HIV transmission. Many citizens and activists in the area fear that shutting down Oasis would be a death sentence to community members in the area and result in a massive HIV/AIDS outbreak.

In July, AIDS Alliance filed a lawsuit against the city in an effort to protect the program, resulting in Oasis’ continued operation and protection until at least November 12th, 2021, although many fear for the fate of the organization after this date. Local advocates have been working for over a year to incorporate Oasis and similar programs into state law in order to better ensure their adequate funding and ability to provide the community with resources.

In fact, New Jersey Governor Phil Murphy recently announced his support for legislation proposed by State Senator Joseph Vitale to expand, finance, and protect these centers. New Jersey, a state of 9 million people, offers only seven of these harm reduction locations, while Kentucky, a state of 4.5 million people, has nearly 60 such sites. Vitale’s goal is to see each state county with at least one, if not two of these centers. However, little tangible change has been made regarding these efforts.

Before the COVID-19 pandemic, drug-related deaths were thought to be slowing, giving people hope for the potential end of the deadly opioid epidemic. However, despite best efforts and many public health initiatives, the United States finds itself in the midst of a drug crisis, with the CDC estimating over 93,000 overdose related deaths in 2020 alone––a new record approximately 29.4% higher than prior years.

In the face of this huge increase in drug-related deaths and hospitalizations, syringe services programs (SSPs) that provide users with clean needles and access to drug-treatment medication has been proven to reduce the transmission of HIV and HCV by 67% and the overall incidence of HIV and HCV by an estimated 50%.

Atlantic City’s heavy casino and night life scene builds the city’s economy on the consumption of drugs and employment of sex workers. While many officials, including those lawmakers in New Jersey’s Atlantic City, argue that resources such as OASIS facilitate and increase community dependence on drugs, harm reduction programs such as OASIS are in fact life-saving to community members for whom these practices will happen with or without the safety precautions OASIS offers.

Interested in learning more about the latest policies to reduce drug-related injuries and deaths? Click here to read about the anti-cocaine spray now in use across UK pubs and public facilities.