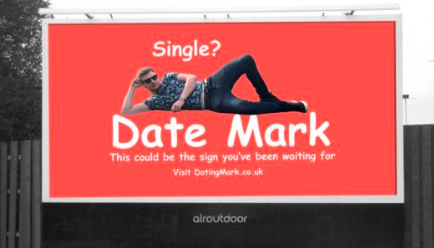 A single man has hired a billboard advertising himself as a potential date. It’s a bold move – but one that’s worked.

Mark, a 30-year-old man from Sheffield hired a billboard to get a date. The billboard reads:

With the smart subheading underneath:

Mark, on his website (linked to on the billboard, with the direct domain name, datingmark.co.uk), says his motivation for the stunt is that ‘all [his] friends are getting married, and [he’s] struggling to get a date.’ We’ve all been there, Mark.

It seems to be working too, as his website contains a counter of how many date applications he’s received. It currently stands at 2202.

What do we know about Mark?

Looking at his website, the high number of applications can’t be a shock. Mark includes lovely photos of himself. One, of him on a slide, clearly shows he knows how to be fun and spontaneous.

Another shows him pensively looking out at a cityscape. Clearly a man of deep intellectual thought…

Mark also includes some useful facts about himself, like the length of his index finger, and the number of girls he’s kissed.

The application process contains a series of boxes to answer, including your social media handles and a photo. There’s a chance to send a message with it to Mark. It’ll have to be something spectacular, to stand out against the 2000 other applicants.

Mark spoke to the BBC, revealing that, unexpectedly for him, most of the applicants so far have been men. He also said the billboard started out as a joke in the pub with his mates. Well, a joke that has worked out well.

On his website, Mark links to a crowdfund, to help him put up more billboards around the country. If he doesn’t get a girlfriend out of this, I don’t know what will.

The billboard is located on Fairfield street in Manchester, so keep an eye out if you’re nearby.