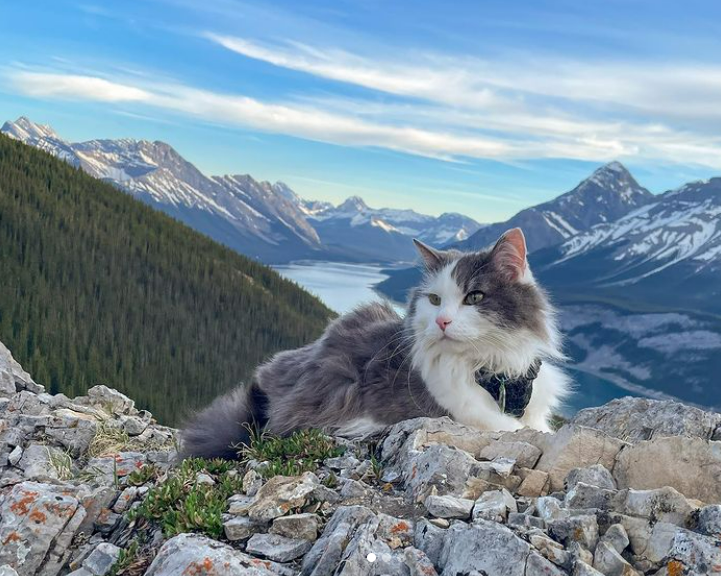 Yesterday marked the 20th International Cat Day, and what better way to celebrate than chatting to Gary the Cat and his owner James Eastham! Having gained thousands of followers on TikTok and Instagram, James and Gary showcase their travels around Canada to their adoring fans. A fan of snow, water, and caves, Gary isn’t your typical housecat and has many fabulous stories to tell…

As an experienced explorer, it’s hard to imagine a time when Gary wasn’t adventuring in the Canadian mountains. James tells me about Gary’s journey from a curious cat to a full-time voyager. ‘Gary’s been going out for about four years now – we started to take him out because he would try and escape our apartment where we were living at the time. His first few unauthorized adventures were escaping into the courtyard to munch on grass. After some time adjusting to the harness inside, we transitioned to the front step. Shortly after that, we moved to the mountains, where we continued his training. Our first real hike was Grotto Canyon, near Canmore’.

Having started his Instagram journey back in 2018, Gary has quite a bit of experience with handling adoring fans. James tells me Gary’s fame ‘started as a bit of a joke to be honest. I started posting regularly to the account after we had moved and I was looking for work. I work in communications so I thought I could say that I was still managing a social media account if I was running one for my cat. It took off a bit more than I was expecting, so we’ve kept up with it.

‘It’s a nice break from a lot of social media these days which sometimes feels a bit overwhelming. Instead, I get to be outside with my cat and post photos that people can enjoy. If we can bring a few smiles to folks then that’s great’.

As a keen mountaineer and explorer, I asked James about his and Gary’s top three adventures. ‘It’s tough to pick just three! I think last winter’s snowmobiling adventure was definitely in the top three. We got hosted by Toby Creek Adventures near Invermere – it was Gary’s first time on a sled, and he did great!

‘This past winter, we also got to explore a glacial cave – that trip was also Gary’s first real backcountry ski adventure. It took me a while to find somewhere I felt comfortable bringing Gary. This trip was through pretty safe terrain and in good conditions. And with how quickly the ice is melting, the cave may not make it to next winter.

‘Last summer, I also did a guided walk with Gary on the Athabasca Glacier – I’ve spent a lot of time up in that area on Gary-free adventures, and so it was great to get to explore the ice in a safe way with Gary!’.

With Gary’s following ever-growing, James tells me, ‘I’d love to take some bigger trips with Gary – most of our traveling has been in Alberta and Eastern BC. I’d like to get to both coasts of Canada with him, and I’d really love to get up north either to the Yukon or Alaska’.

Defying the feline stereotypes, Gary is clearly a lover of the outdoors. ‘It’s also nice to be able to show people that cats can be just as good a companion as a dog’ James says. ‘Sometimes I think people sell cats a bit short, and Gary helps prove them wrong’. Having adopted Gary from a shelter following a car accident when he was younger, James tells me ‘I also think its great that Gary’s just a regular shelter cat – you don’t necessarily need a fancy breed to have a cat that will travel with you. [Gary’s] bum wiggles a bit when he walks and he can’t jump as high as other cats’ but seeing him embark on wonderful adventures is so special. What a fighter!

It’s clear to see Gary’s love of water and paddling over on his social media. I asked James if Gary has always had a fondness for the waves. ‘Gary’s always been interested in water, which is why we introduced paddling in the first place. He had gone for a few dips in streams and lakes on our hikes, so we decided to see if he would enjoy being on top of the water too. Turns out he does, and it’s become one of his favorite things to do. He just sits on the front of the boat and often takes a nap while getting rocked gently by the water’.

It’s undeniable that part of Gary’s following is down to Gary’s fantastic temperament and love of exploring. I wondered if James had encountered any other cats on his travels. ‘We occasionally run into other cats! On one hike we ran into three other adventure cats, even. I think it’s becoming more common for folks to bring their cat out on a leash, which is great! It’s a safer way for cats to get outside than just roaming free, and it’s better for the wildlife, too’. If you love Gary’s travels, why not read about the new game Stray, a first-person player with a feline protagonist, in Hitori’s recent article?

Be sure to look out for more big adventures with James and Gary over on their Instagram and TikTok!