After a barrage of terrorist attacks and Lex Luthor being elected as president, no one’s denying it: 2016 has been shite. And, of course, all those celebrity deaths didn’t help. It has been so poor, in fact, that I was left too cynical to bother celebrating New Year. Well, it is just a number…always struck me as one of the sillier celebrations on this planet. Anyway, not all of 2016 was doom and gloom, as you will now see. Enjoy.

·         Scientists figured out how to link robotic limbs with the part of the brain that deals with intent to move so people don’t have to think about how they will move the limb, it can just happen.

·         Child mortality is down everywhere and it keeps going down.

·         Thanks to the ice bucket challenge the gene responsible for ALS has been found, meaning we are closer to an effective treatment. Let me rephrase that: we are close to getting a treatment for a very bad disease because a lot of people (including really hot celebrities) got wet.

·         Michael Jordan donates 2mil to try and help bridge connection between police and the community.

·         Pakistan has made strides toward outlawing honor killings.

·         California is now powering over 6 million homes with solar power, a record in the US (and that is the tightest shit)

·         Apparently world crime as a whole has drastically declined as a whole in the last couple of decades.

·         Coffee consumption has been proved to help curtail cancer and suicide rates.

·         Speaking of coffee Starbucks figured out how to donate perishable food in a food safe way.

·         The ozone layer is repairing itself and all the work we did to get rid of those aerosol chemicals was actually worth it.

·         A new therapy developed in Israel could cure radiation sickness.

·         The Anglican church resolved to solemnize same-sex unions the same as opposite-sex unions which required a super majority of all three orders of the church (lay, clergy, bishop).

·         The Rabbinical Assembly issued a resolution affirming the rights of transgender and non-conforming individuals.

·         Dentists are once again providing free care to veterans who need it.

·         The Orlando Shakespeare Festival showed up with angel wings to block funeral-goers for the Orlando Pulse victims, view from anti-gay protesters

·         LEONARDO DICAPRIO WON AN OSCAR! EVERYONE READING THIS LIVED LONG ENOUGH TO SEE LEO FINALLY GET WHAT HE DESERVED

·         Kung Fu Panda 3, this franchise is still going strong despite that its about a panda played by Jack Black

·         Kubo and the Two Strings. Haven’t seen that yet as well but its Laika so I know it’s a masterpiece

·         Captain America: Civil War. Seriously is the best marvel movie yet in my opinion I need more.

·         Zootopia. Oh don’t mind me I’m just a movie that tackled the issue of racism and not only game changed animated films but also made a billion dollars

·         The Hamilton Mixtape is coming out. Which is a bunch of artists singing songs from the musical (Sia, Usher, Regina Spketor, etc.) I’m excited.

·         A personal victory for myself, I joined Tumblr and met angels in blog form so…that’s uplifting.

·         And I met my favorite voice actor at a con which was a bucket list accomplishment.

I know it’s trivial, but props for mentioning Zootropia – that was a fine movie, although we all know that it wouldn’t have been what it was without the sloth. Obviously, there are far more important and wonderful things acknowledged above; it really is a lovely list.

You know what? That was a feel-good read. Let’s have another list. 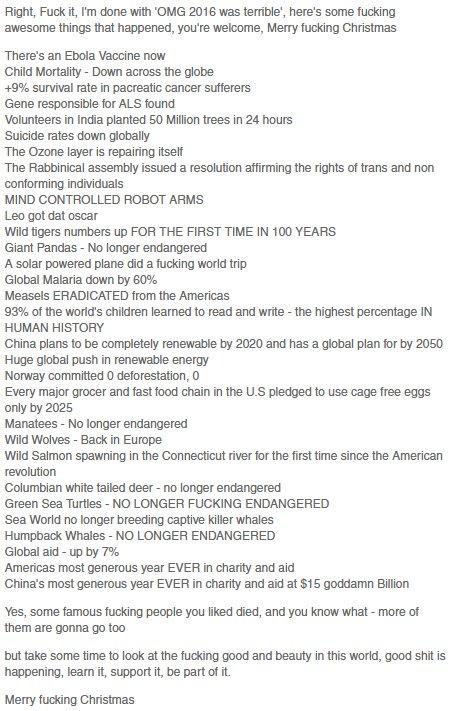 If you’re still pissed at 2016, however, then you’ll find plenty of people who agree with you in this video by John Oliver.

In this article:Featured, life, pad