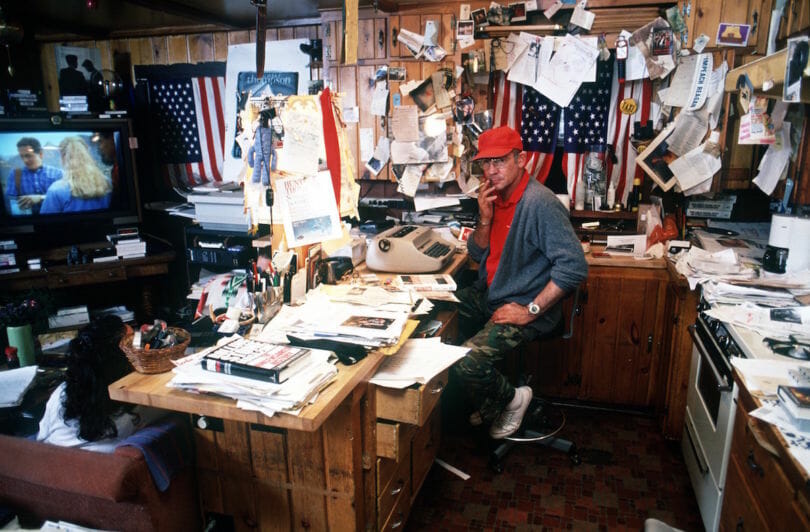 Twelve years after his death, Hunter S. Thompson’s star still shines, especially in Hollywood. The films Fear and Loathing in Las Vegas, Where the Buffalo Roam, and The Rum Diary are all based on the countercultural journalist’s life and writing. Now, MGM is producing a biographical TV series about Thompson. Naturally, they’re calling it Fear and Loathing.

In their statement, MGM added that Davey Holmes will develop the series, as part of his contract with the company. He currently serves as showrunner for the Get Shorty TV adaptation, and will work on both shows at once. Bob Nelson, best known as the screenwriter of the film Nebraska, will write the scripts.

Mark Burnett, President of MGM Television Group, said, “As we look to the future of MGM Television, it is imperative that we forge long-term relationships with creators who have an eye for dynamic storytelling. Davey is tremendously talented and has demonstrated that he can deliver quality programming that will resonate with viewers.”

Holmes himself said, “I couldn’t be more excited or proud to be embracing this [deal.] … I can’t say enough about the intelligence, daring creativity and overall support MGM has brought to our collaboration.”

The Gonzo Part of the Article

Other than that information and those quotes, MGM did not reveal anything about the show. The show might still be in an extremely early developmental phase. If so, maybe MGM only said this much to measure public interest. Or maybe MGM is definitely committed and just wanted to let us know. Still, right now it looks like they only have Thompson’s name to excite us. They don’t even have any actors.

Meanwhile, when it comes to content, all we know is that the show will be “biographical.” Hunter S. Thompson led an eventful life, to say the least. Holmes and Nelson have so much interesting content to choose from. How about the time he spent riding with the Hells Angels motorcycle gang? Or his involvement in the failed “Freak Power” political revolution in Aspen, Colorado? Or the various sporting events and presidential races he covered, with similarly disturbing stories as results?

Oh, but the show’s called Fear and Loathing. Won’t they just do a new adaptation of Fear and Loathing in Las Vegas? After all, it’s already a cult classic movie. But that’s probably why they won’t make this seemingly obvious choice. That lead actor and director will have a hard time standing in Johnny Depp and Terry Gilliam’s shadows. I’m sure MGM will strive to avoid comparisons.

Point is, there’s a lot of fear and loathing in Thompson’s life story. It’s bound to make for a fun show.

In case you couldn’t tell, I’m a huge fan of Hunter S. Thompson. Here’s an article about his list of the best ‘60s albums – that I wrote in his style.