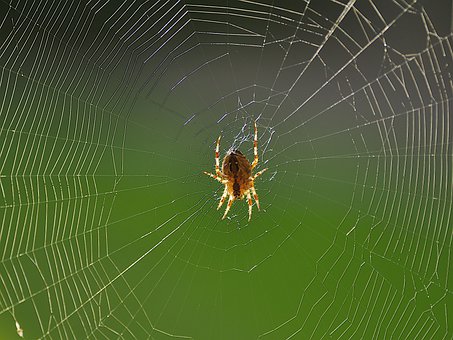 Experts believe we may be able to communicate with spiders after scientists from the US translated a spider’s web into a sonic composition.

Scientists scanned a natural spider web with a laser before using computer algorithms to transform 2D cross-sections into a 3D network of the web. In doing this, scientists were able to compose music from the frequencies of the web’s vibrations, assigning different sound frequencies to each individual strand.

Based on the 3D network of the web, scientists produced musical ‘notes,’ then arranged them in patterns to construct melodies.

The sonic translation is quite an uncanny and ghostly, yet beautiful, composition of sounds that researchers have played in several live performances.

Markus Buehler, Ph.D., the project’s principal investigator, has offered an explanation of these sounds: “The spider lives in an environment of vibrating strings. They don’t see very well, so they sense their world through vibrations, which have different frequencies.”

These vibrations are caused by the spider stretching a silk strand as it engages in constructing its web. Vibrations can also occur when the web is moved by something like wind or a fly getting trapped.

According to Buehler, this development could allow a ‘new source for musical inspiration that is very different from the usual human experience,’ as well as an increased understanding of the 3D architecture of webs.

The team has also designed a virtual reality experience, granting people both visual and aural access ‘into’ the web.

The virtual reality environment is really intriguing because your ears are going to pick up structural features that you might see but not immediately recognize. By hearing it and seeing it at the same time, you can really start to understand the environment the spider lives in.

Moving forward, the team is focused on learning to communicate with spiders in their language. They have captured web vibrations as a result of spider’s engaging in various activities, like building a web or communicating with one another.

These frequencies may sound similar to the human ear, however, an algorithm was used to accurately categorize the frequencies into distinct activities that comprise a spider’s life.

If you want to see more on the beauty of spiders, click here!