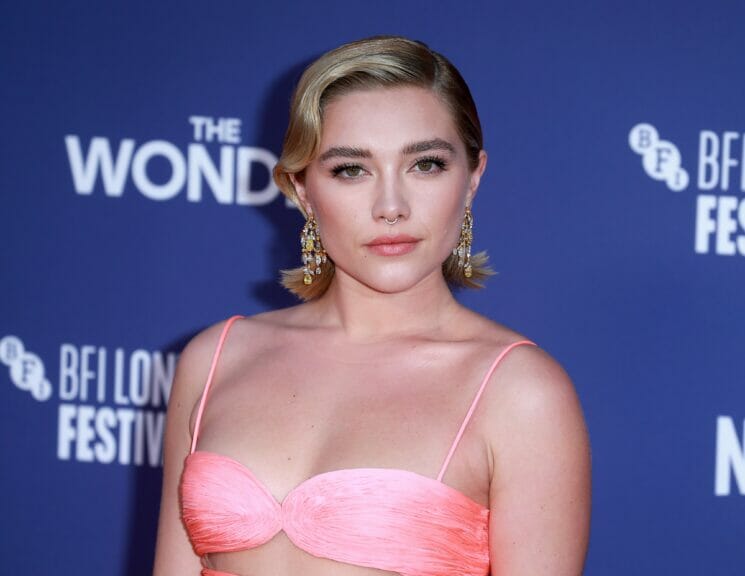 Image by Fred Duval on Shutterstock

With the release of Don’t Worry Darling last month, Florence Pugh has given us another stunning performance on screen. But where did the actress make her debut, and where have you seen her before?

At 17, Florence Pugh was cast in her first movie, The Falling (2014), and was highly praised for her work. Alongside Maisie Williams, she played the supporting character, Abbie. The teen drama centered around a mysterious illness spreading through a girl’s school. Her breakout role came in 2016 when she starred in Lady Macbeth (2016). She displayed her extraordinary talent and gained a large following for her stunning performance.

In 2018, Pugh played major roles in movies including Outlaw King, Malevolent, The Commuter, and King Lear. With tension and emotion at the heart of Pugh’s characters, 2018 was certainly the year Pugh established herself as a major star. In early 2019, Pugh starred in Stephen Merchant’s Fighting with My Family, proving her talent knew no bounds and became one of Hollywood’s most in-demand actresses.

Midsommar (2019) is undoubtedly Florence Pugh’s masterpiece. A film tainted with disturbingly uncanny moments and sinister themes, Pugh’s showcase of emotion, heartbreak, and uncertainty makes it one of her best. In the film’s opening, Pugh’s character Dani finds her sister has killed herself and her parents. On the verge of a breakup, Dani’s boyfriend invites her to a folk-ish getaway in Sweden. The trip is tainted with unsettling moments, eventually revealing itself as a horror film with a terrifying end. The movie saw Pugh nominated for Best Actress, Bravest Performance, and Actress of the Year.

Little Women (2019) cemented Pugh as an award-winning actress for Best Supporting Actress and Best Ensemble Cast. Written by Greta Gerwig and adapted from Louisa May Alcott’s 1868 novel, the film chronicles the lives of the March sisters, where Pugh plays Amy. While the character was long thought of as the youngest, spoiled child, Pugh turned Amy into an interesting character. Pugh recalled Gerwig’s thoughts for Amy; ‘I really want Amy to be more. I want her to be more than just the pretty young sister who’s a brat who burns the book and gets the guy’.

It is undeniable that Pugh executed Gerwig’s vision as she transformed Amy into a much-talked-about character. She portrayed Amy as a youthful, competitive young girl with a responsible and mature edge. Featuring huge names like Emma Watson and Saoirse Ronan, the film has become a modern classic and one of Pugh’s best.

Landing a leading role in the blockbuster Marvel Cinematic Universe, Pugh starred alongside Scarlett Johansson in Black Widow (2021). The film sees the two actresses play foster sisters who escaped from the ‘Red Room’, a secret institution used to turn young girls into spies. Her debut in the MCU saw her perfectly balance the role of the comedic sidekick and caring younger sister bound by a shared past. Going on to star in Hawkeye (2021) with Jeremy Renner, the Disney Plus series was a fan favorite, scoring 92% on Rotten Tomatoes.

Released just last month, Don’t Worry Darling (2022) made headlines before its release. Starring Harry Styles, Nick Kroll, and Chris Pine, the film has been highly anticipated since it was announced in 2019. It was rumored that Pugh and director Olivia Wilde were feuding throughout the film’s production. Paired with Chris Pine and Harry Styles’ ‘spitgate’, the film dominated headlines around its release. Nevertheless, the film follows Alice (Pugh) and Jack (Styles) and their idyllic life in a 1950s town. While reviews haven’t been all positive, the uncanny and secretive nature of the film fits with Pugh’s magnificent portrayal of complex characters and draws notable similarities with clueless Dani in Midsommar, as both are in the dark about their true situations. Her performance is stunning, and her gorgeous dress at the film’s premiere in Venice certainly caught media attention.

Set to star in the upcoming Netflix film, The Wonder and big screen hits like Dune Part II and Oppenheimer, Florence Pugh’s domination of the big screen is stronger than ever. Much loved by fans, Pugh’s performances never fail to impress, and her thirty-two film awards cement her as one of the greatest actresses of our time.