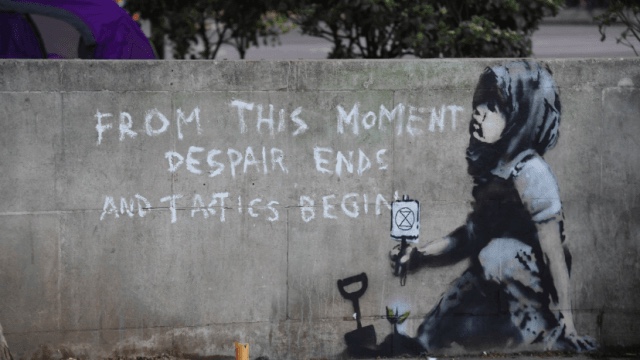 Banksy is probably the most elusive artist of our generation. There isn’t much known about them. Anonymity is important to his art since graffiti is illegal. However, the art that Banksy creates often has a political agenda or message, through the dark images they depict. This latest Banksy is no exception.

On April 15th the “International Extinction Rebellion” began in London. This consisted of several demonstrations and marches throughout the city. Many contributors have been sleeping in tents at  their locations as a form of protest.

10 days into the protests, this Banksy artwork appeared at the Rebellion site in Marble Arch. The art depicts a small child, with a seedling and a spade, while holding the logo of Extinction Rebellion. Next to this, it says:

“From this moment despair ends and tactics begin”.

I think it is safe to say we know where Banksy lies in their feelings on climate change. And who knows, perhaps he is out there protesting with the rest of them? Since the demonstrations began, over 1,000 people have been arrested and 69 people been charged. However, most people taking part have said that the cause is worth going to prison for.

Extinction Rebellion is fighting against climate change and the simple fact that the Earth is warmer than it should be. They are asking for government officials to take notice and to tell the truth about what is happening to our planet. Furthermore, they want plans in place to have greenhouse gas emissions at net zero by 2025.

This isn’t the first time Banksy has gone political. Read here about how they marked Brexit