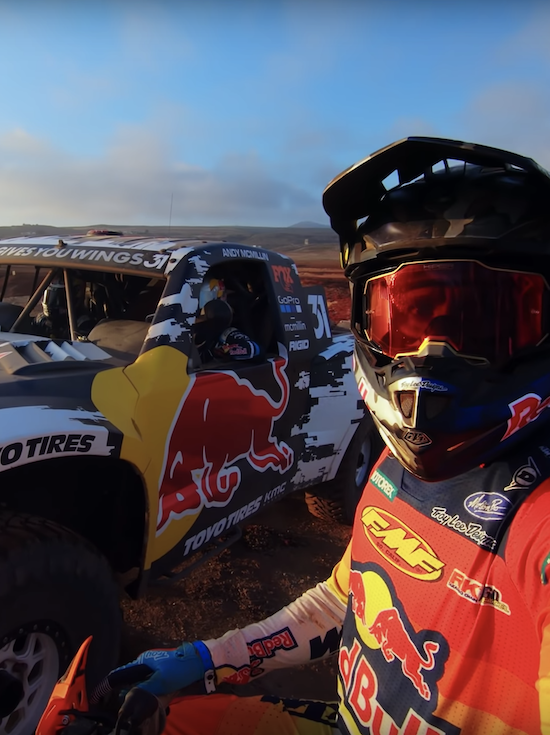 GoPro athletes Andy McMillin and Taylor Robert challenge each other to a high-speed desert duel in the Baja Desert, Mexico, filmed with 4K resolution.

Andy McMillin is a 5x Baja 1000 champion whose passion for desert racing began in childhood. He advanced to the premier Trophy Truck class of desert racing in 2006, moving on to become the youngest driver to win the Baja 1000 Overall Title.

Taylor Robert’s passion for racing also began in early childhood, but with dirt bikes. A series of accidents and injuries littered his racing career, yet nevertheless, he entered the pro ranks of dirt bike racing full-time in 2009. Additionally, Robert has garnered several gold medals from ISDE (one of the world’s most prestigious off-road motorcycle events), even aiding the US in achieving its first ISDE victory in 2016.

Trophy Trucks (the type used in the desert duel) are vehicles used in off-road racing at high speeds and are only legally allowed for desert driving. I wonder why. Possibly because of safety considerations and the vehicle’s gargantuan carbon emissions and footprint? See for yourself in the video below:

As you can see in the video, desert racing generates storm-worthy quantities of dust and large carbon emissions. On an unrelated note, am I the only one who was more concerned about the poor bushes and shrubs trampled by the truck in the video than the dirt bike’s gravity-defying leap over the truck?

For more desert-related sports content, check out Will Smith’s attempt at desert skiing.