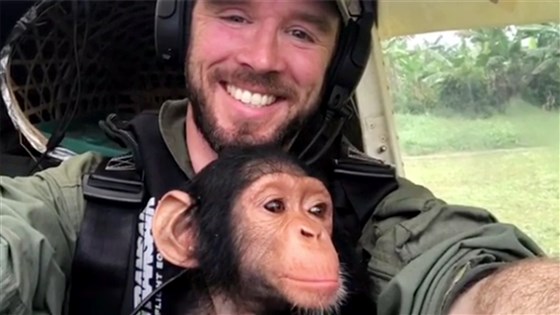 This is so cute! Mussa, a baby chimpanzee found in the Democratic Republic of Congo, has been rescued from poachers.

The video, posted by Associated Press, shows the pilot, Anthony Caere, getting settled with the monkey and hushing it as he explores the cabin. Mussa then helps to adjust the throttle of the plane, as the pilot watches over him.

The two begin to bond and it is clear he is getting emotional about his rescue. Anthony treats Mussa like a child who needs comforting after being separated from his mother, who was captured by the poachers. Often monkeys such as chimpanzees and gorillas are captured to exploit them at zoos or illegal pet markets. However, the comforting works wonder as the chimp stays calm. So calm in fact that he even takes a nap on the pilot’s lap!

Finally, they land in a separate area of the Democratic Republic of Congo and are greeted by professionals at the center for rehabilitation, Lwiro Primates. Mussa grabs onto the arm of a woman carer and she pulls him into a hug. It is such a touching moment to see this animal out of harm’s way and in proper care.