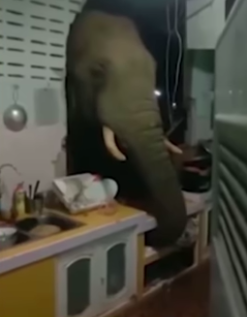 Earlier this week, a woman in Thailand woke up to find an elephant crashing through her house to hunt for food.

Ratchadawan Puengprasoppon woke up to crashing and banging early on June 19th, she said. When she went downstairs to see the cause of all the ruckus, she found an elephant’s head sticking through the wall to her kitchen.

Boonchuay, the male elephant, can be seen in the video below looking rummaging through the kitchen in search of food. The gaping hole he stuck in the wall aside, the elephant also tossed utensils and pans around the space, opened drawers, and chewed on plastic bags, leaving quite the mess to clean up.

The Guardian reports that this incident is not the first time an elephant has been caught scavenging for food.

Boonchuay the elephant has wreaked similar havoc in Chalermkiatpattana in Kaeng Krachan national park, on his first trek into the village.

His prior visit to the same house cost upwards of £1,000 in repairs.

Itthipon Thaimonkol, the superintendent of Kaeng Krachen, Thailand’s largest national park said, ‘They come to visit quite often. They always come when there is the local market because they can smell food,’

Dr Joshua Plotnik, a psychologist who works with elephants in Thailand, said these incidences are becoming more frequent in Asia and are ‘likely due to a decrease in available resources and an increase in human disturbances in the elephants’ habitat.

So maybe we stay out of the elephants’ homes for now, and they’ll stay out of ours…right?