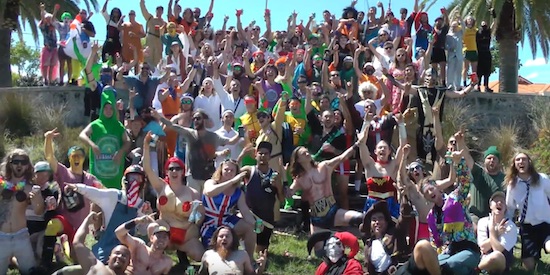 Tour de Fridge: it’s like Tour de France. Except it’s in Australia. And they only bike around Ellenbrook. And instead of winning the race, the goal is to get as absolutely shitfaced as possible.

Tour de Fridge 2017 was just as crazy as its predecessors. Dozens of guys show up to the first house wearing ridiculous costumes (ex. the Ninja Turtles, Goku, and Wonder Woman). Then, the drinking starts. They bike across town, stopping at different rest-stops and chugging gallons of beer. The wild rest-stop antics are probably the best part, though.

If you want to see more drunken shenanigans, you should check out this 2-story beer pong dunk.