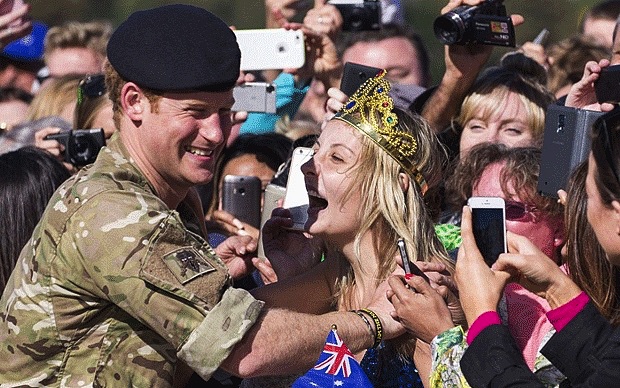 The Royal Wedding is finally upon us and millions of people will be watching on TV sets in the UK. Around 100,000 tourists are expected to come to Britain, with thousands lining the streets around Windsor Castle.

Some are travelling across the world. This is true of Australian resident Victoria McRae. In 2015, this blonde stole a kiss from Prince Harry while he was visiting Sydney. She held a sign saying; ‘will you marry me?’ and ‘last chance’, having asked him on his previous trip there in 2013. The Prince offered her his cheek as compensation, but Victoria swooped in for one on the lips.

Now, ahead of his upcoming nuptials, McRae has a plan.  Reports have said she’ll be standing in a wedding dress outside Buckingham Palace. That might be a problem seeing as the couple are tying the knot in St. George’s Chapel at Windsor Castle. “In case Prince Harry gets cold feet”, Victoria says she will be waiting for him.

How far would you travel for a chance with a Windsor?

This woman has tried her luck a few times, also having given Prince William, on his visit, a note to give to Harry. Perhaps she thinks she’d make a good princess because of her royal name? We hate to say it, but Victoria might just be a bit too late. This type of behaviour is a little concerning if she is serious. But it could all be a joke and fun for her. Both for her and Prince Harry’s sake, I hope this is true.

Either way, she is joining the many, many tourists flying over for the big day. We wish the best for the happy couple. Also, if Victoria does go to the wrong venue, then they have dodged a bullet there.

The lead up to the Royal Wedding has not been smooth sailing, catch up here!