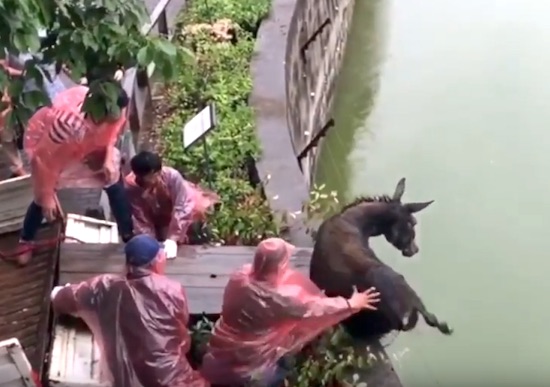 Facing financial issues, a Chinese zoo resorted to throwing a live donkey into a tiger exhibit this past week. There… might’ve been a better way to go about this.

A video surfaced online of several Chinese zookeepers pushing the terrified animal into a moat surrounding the tiger enclosure of Yancheng Wild Animal World in Changzhou, Jiangsu province. Visitors of the park that afternoon then had to watch in horror as the helpless donkey was killed—an act that took 30 minutes for the out-of-practice predators.

A zoo shareholder later claimed they had to kill some animals to save costs. It’s an unfortunate situation. There probably were other options than this, though. Staff members said that killing live animals is good for the tiger’s health. (But what about the donkey’s health? I mean…) Perhaps the staff could have sent the donkey to a sanctuary or farm. Or maybe made it so the donkey didn’t suffer. Or put the donkey in the exhibit outside of zoo operation hours, at the very least.

At the end of the day, I suppose the tigers got a meal and the zoo staff were able to take care of the financial matter. But at what cost?

You can watch the shocking video below. WARNING: Graphic content.

Speaking of being surrounded by predators in the water…