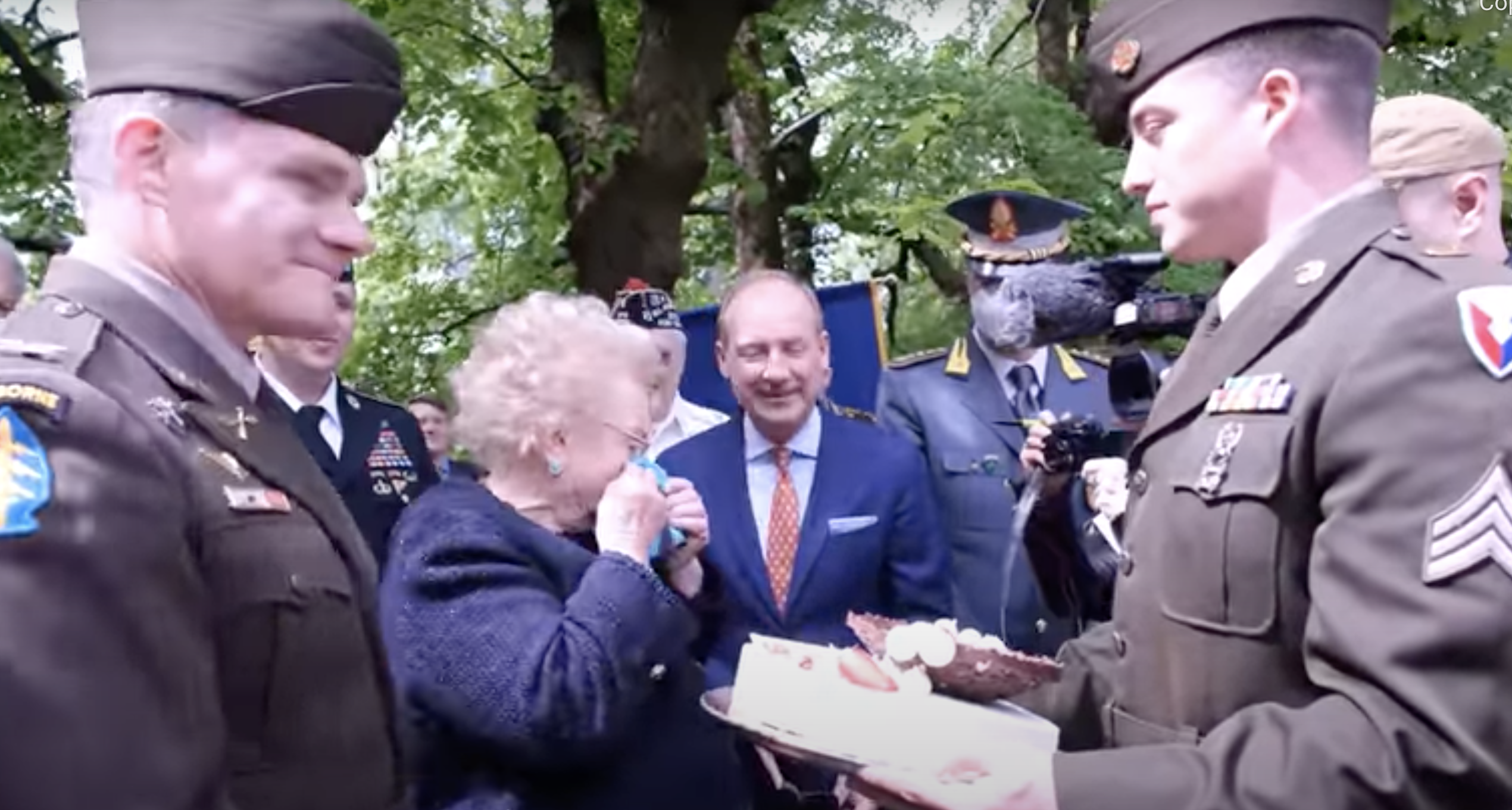 Among the myriad stories recounted about the ravages of World War II in Europe, one doesn’t usually hear about a thirteen-year-old girl’s stolen birthday cake.

And yet, that story has recently come to light, only 77 years after the event took place.

The US military presented an Italian woman with a new birthday cake, precisely 77 years after American soldiers, who were fighting in her village, ate the original cake prepared for her 13th birthday party.

Sgt. Peter Wallis and Col. Matthew Gomlak presented Meri Mion, the Italian woman, a new cake (adorned with frosting and fresh fruit) on Thursday, April 28, according to the US army’s website.

Italian officials hosted a ceremony at Giardin Salvi in Vicenza, Italy on the eve of Mion’s 90th birthday.

The story of the stolen cake, however, dates back 77 years to the day, on April 28, 1945, when US troops from the 88th Infantry Division battled German soldiers in the northeastern Italy city in the region of Veneto.

Only a day before her 13th birthday, Mion experienced the ravages of war at the threshold of her village, San Pietro. Mion recalls German soldiers battling and shooting near her farm whilst she and her mother hid in the attic.

The following morning, the morning of her 13th birthday, Mion woke up to her freshly-baked birthday cake missing. Mion’s mother had baked the cake and left it for Mion on the windowsill, and in the meantime, after the fighting had died down, American soldiers had stolen and eaten the cake.

As a result of the fighting, it is estimated that there were at least 19 American troops killed or injured. After combat ceased, however, residents of Vicenza welcomed American soldiers with bread and wine.

Col. Matthew Gomlak, a commander of the US Army Garrison in Italy, said, “The warm welcome by the people of Vicenza continues to this day,” referencing the bread and wine that greeted the American troops following the battle.

Gomlak, when speaking about Mion’s reaction to her stolen birthday cake, a gateau, following the battle, said, “Her happiness turned into disappointment later when the resourceful American soldiers made off with her birthday cake.”

An expectant crowd of US and Italian soldiers, veterans, police, and locals of Vicenza observing this long overdue and emotional gesture, and a moved Mion wiped away the tears dribbling from her eyes.

“Tomorrow,” Mion remarked, “we will eat that dessert with all my family, remembering this wonderful day that I will never forget.”

Sgt. Wallis later said, “It makes me feel great to give her the cake.”

And so, just like that, a stolen cake found its way home–77 years late, but, as the old adage goes: better late than never. Right?

Enjoyed this one? Check out more: The End of Alcohol and the Rise of Sober Influencers