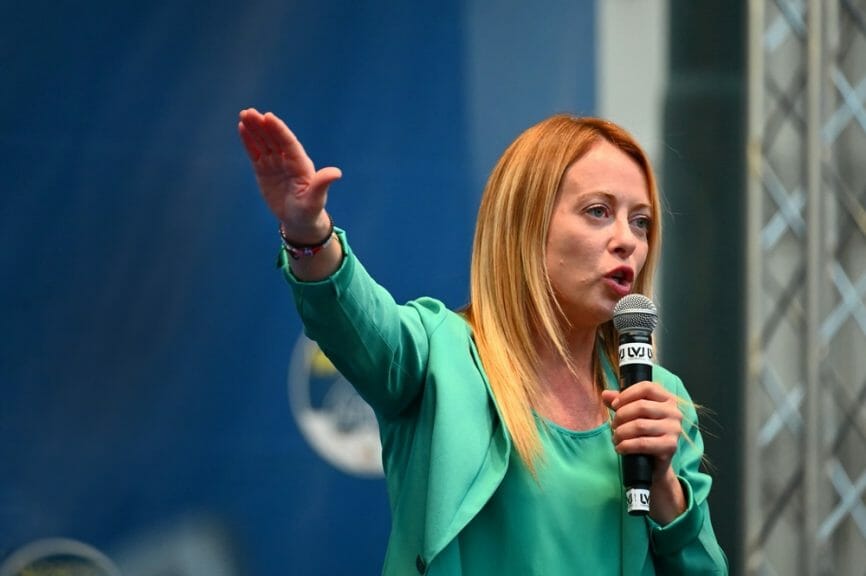 With the Italian elections for the new Prime Minister getting nearer and nearer (25 of September is voting day!), Rome’s Giorgia Meloni, leading the Fratelli D’Italia party, is seemingly going to achieve the largest amount of support. However, her unique history of fascism and fantasy is one intermingling childish allure with hard-right politics.

Most recently at the last rally in Rome before election day, Meloni was introduced on stage by the actor Pino Insegno with a Lord of the Rings quote: “Verrà il giorno della sconfitta, ma non è questo“. (“The day of defeat will come, but this is not it.”)

So, where did all this folklore fantasy begin to intermingle with Meloni’s post-fascist hard-right militancy?

It is, sadly, nothing new.

As a young political activist, Meloni has been known to engage with the post-Fascist Italian Social Movement using familiar nicknames, i.e., going by Frodo or Hobbit with her pals.

They dressed up in Tolkien gear, and went school to school spreading their political message. They incorporated plenty of Tolkien’s fantastical elements in their approach to spreading their hard-right politics, such as starting their cultural discussion meetings at the ‘sounding of the horn of Boromir’, or attending ‘Hobbit Camp’ and also being supported in their extremist folk chants by a band called Compagnia dell’Anello – which literally translates to Fellowship of the Ring.

For centuries, Frodo and his companions have been idols for cosplaying a new post-Fascist right wing identity. Tolkien’s assimilation of traditionalistic mythical symbols, the use of heroes, and fictional myths, all aid in the creation of Fascist iconoclasm.

I think that Tolkien could say better than us what conservatives believe in. I don’t consider ‘The Lord of the Rings’ fantasy.

Indeed, it seems more scripture than a fictional saga for the leader of Fratelli D’Italia.

Her fantastical frenzy has long been a part of her personality. She was known in chat rooms as Khy-ri, the “little dragon of the Italian undernet“, in her 20s. She also named her political conference ‘Atreju’, after the heroic half dragon half Labrador protagonist of “The NeverEnding Story”, a cult film of the 80s.

Her political career has been full of supernatural and otherworldly references. In 2008, as a government minister, she was even spotted posing alongside a statue of Gandalf. In 2019, she shared her idolization of Captain Harlock, a famous manga character, for being a space pirate that is “a symbol of a generation that challenged the apathy and indifference of people.” Most recently, she publically complained that her campaigning has restricted her from binging Amazon Prime’s latest “Rings of Power” series, based on Tolkien’s fantasy world.

And Meloni is not alone in believing in Tolkien’s conservative views. The globally acclaimed saga has often been at the core of cultural and scholarly conversation and sparked various debates over Tolkien’s own racial and ideological beliefs. His views on modernity and globalization are not as deeply embedded in a completely fantastical world as one may choose to believe, but it seems his biases seep rather deeply into his creation. Indeed, the sense of nationalism grows fertile throughout the saga, and many right-wing youth have begun to view themselves in the heroic archetypes his work portrays.

Indeed, Umberto Croppi, formerly a member of the same post-Fascist Italian Social Movement as Meloni in her youth, shares, “The genre of fantasy in Italy has always been cultivated by the right.” Croppi adds that the similitude between Italian conservative politics and the fantasy world share a mutual “vision of spirituality against materialism, a metaphysical vision of life against the forms of the modern world.”

Croppi is now the director of FederCulture, the biggest national association representing both public and private organizations in the Italian culture industry.

Giorgia Meloni’s major stride in the latest public polls are cementing the reality of her becoming the first female Prime Minister for Italy – but also, the first Prime Minister from post-fascist ideals. Fratelli D’Italia’s main objectives seek to impose a military-backed naval blockade on Italian shores to physically restrict the access of illegal migrants and wants to restrict transactions between the Italian economy and internationalist banking.

Indeed, the hope for an anti-materialist world and ‘metaphysical vision’ of the modern world wavered as Mussolini’s loyalists discarded him following his ‘switching of sides’ to the Allies during WWII. Thus, the Italian Social Movement started gaining traction. The young members started referring to the “Lord of the Rings” novels as an Italian edition of it and started circulating the bookstores, prefaced by Elemire Zolla. Zolla is a hard-right philosopher that first suggested the view that Tolkien was indeed representing most of the political and daily struggles we face in the modern world. The youth of the Italian Social Movement thus began to view themselves as fighting the leftist dragons, orcs, and scary cultural creatures reaping since the fall of Fascism.

Thus, Camp Hobbit came to be. Tolkien’s fantasy became a safety blanket for the fascist youth to express their sentiments – instead of publically and visibly quoting Mussolini or adorning fascist emblems in the streets where leftist policies were becoming increasingly popular…

Umberto Croppi was one of its primary founders:

The idea to call it Camp Hobbit came from a real strategy.

No longer were the fascists identifying themselves as militant, violent, and aggressive because they began to see the expanding leftists as such. So instead, their hero was to be the “little hobbit”.

We wanted to get out of this militarist, heroic idea.

So, at Camp Hobbit, Celtic cross flags disguised within the Tolkien aesthetic flew in the sky. The Compagnia degli Anelli band played out anthems on patriotic European identity such as “Tomorrow Belongs to Us”.

(Opportunistic time to recall a scene in “Cabaret” that depicts a member of the Hitler Youth singing the same/similar ballad, “Tomorrow Belongs to Me”…)

Croppi himself has claimed that there were a lot of Fascist emblems and symbols in Camp Hobbit, but it was, in his words, “ironic”.

In 1993, Meloni herself joined Camp Hobbit alongside her brother-in-law, Francesco Lollobrigida, who is now also a leader in Fratelli D’Italia. Lollobrigida says they joined with an intention to “break with the patterns of a party that still had inside of it people who had been in the Social Republic, who had done fascism.”

The youth attending Camp Hobbit were avid readers, but read mostly books from the notorious Roman bookstore Europa. The hard-right bookstore held editions of “Mussolini Boys”, “The Occult Origins of Nazism”, as well as an entire bookshelf dedicated to Julius Evola.

Evola was a Nazi-affiliated Italian philosopher with a long history of taboo affiliations, but a strong fan-favorite for the post-Fascist youth. Evola boasted nostalgic idealism that progress and equality were equally poisonous disillusions to hope for.

However, still, Evola and his right-wing affiliates were no match to what “The Lord of the Rings” politically spelled out for the young Giorgia. Such teachings on the “value of specificity” that she learned from the collaboration of orcs, elves, dwarves, and hobbits, were to be interpreted in her future vision about European sovereign nations and separate identities.

Hence came along Meloni’s own version of Camp Hobbit, in 1998. After becoming leader of the National Alliance, which followed the Italian Social Movement, her own political festival was named Atreju – as aforementioned. For Meloni, Atreju is a symbol of “a boy in a battle against nihilism, against the Nothing that advances”.

And thus, Meloni’s anti-migration and pro-nationalistic attitude have become affiliated with a romanticization of “saving Middle-Earth”. The battle cry is ringing far and wide across Italy, as polls suggest. Most recently, at a Fratelli D’Italia rally, a 21-year-old was spotted donning a t-shirt that plainly read ‘HOBBIT’ across the chest.

This sense of identity is separating Fratelli D’Italia supporters from other party supporters in this year’s election, and spurring their urge to battle and protect what they believe is their sacred Middle-Earth – an Italy that is adorned with post-Fascist and hard-right crudity, a nationalism that justifies militancy, separatism that encloses the economy within itself.

Is Middle-Earth’s fantastical history going to be Italy’s new future?

In other Italian news, read here how the growth of racist anti-migration laws and a strengthening of Italian nationalism is a growing threat for all Italian residents as a Nigerian man was racially attacked on the streets just a few months ago.

If you are an Italian citizen, make your vote count on the 25th of September, 2022.