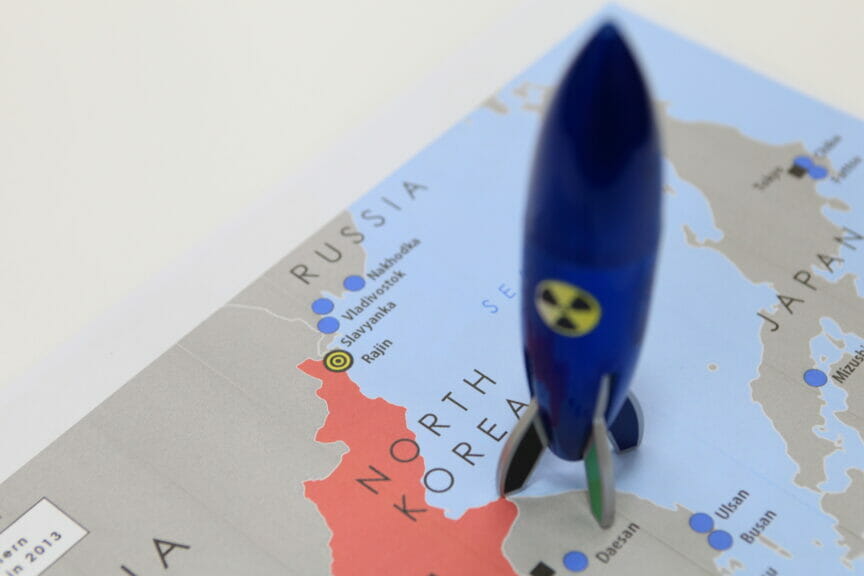 Early Tuesday morning, on the 4th of October, Japanese residents in northern Japan were awoken by sirens and alarms warning of the presence of a nuclear missile flying over the nation and the need to seek shelter immediately. Sent by North Korea, this test missile neared Japanese land for the first time since 2017.

Since January of this year, North Korea has slowly been increasing its weapons and arms testing. There have allegedly been 23 so far and four in only the last week. With the regularity of the tests, many stopped paying attention to what sort of strategizing this could entail from North Korea’s leader, Kim Jong Un.

The Missile was launched from Mupyong-ri, North Korea, flew over Aomori Prefecture, in Japan; then traveled 2,850 miles continuing east, and landed in the Pacific Ocean, a good 2,000 miles away from Japanese soil.

Back in 2017, the last time nuclear alarms sounded amongst Japanese residents, the political climate was far different. The threats of conflict were high then, but quickly subsided with the overture of a less combative American president, with the Russian invasion of Ukraine, and President Putin’s active threats of his predisposition to engage in tactical nuclear weaponry. However, with the world recovering from the economic disaster caused by the COVID-19 pandemic, the energy and gas shortages, and the impressive levels of inflation, all nations are taking a different and more wary approach in regard to national prosperity.

In fact, the White House and the United Nations have turned most of their attention to Russia and China (China is currently engaging in military drills near Taiwan).

It seems Pyongyang’s intent to gather more attention has proven successful with this test missile launch at an intermediate range. The ballistic missile has traveled the longest distance ever by a North Korean weapon. Its trajectory (2,800 miles distance traveled with an altitude of 602 miles) is apparently more powerful than the Hwasong-12, tested in 2017 by North Korea. This is a good time to remember that in 2017, North Korea threatened to attack Guam, a small American territory in the Western Pacific, with an “enveloping fire.” This new ballistic missile can now reach the distance from North Korea to Guam.

Back in 2017, North Korea and Donald Trump had a ferocious back-and-forth play with nuclear weapons. However, the reactions to this year’s missile tests seem to have been more limited and reserved due to today’s political climate. The palpable resistance is possibly from the fact that China and Russia, both members of the United Nations Security Council, have the power to veto the actions of other member states.

For instance, in March, when North Korea started increasing its tests for its intercontinental ballistic missiles, the White House proposed a UN resolution to impose sanctions restraining North Korea. China and Russia used their position to veto this move.

Experts speculate that this more reserved approach to North Korea’s tests is positive. Since North Korea is searching for a combative reaction, denying them one would hopefully maintain calm across the continents.

Others speculate that this missile test directly threatens South Korea’s attempts to strengthen alliances with the United Nations and solidify its alliances with Japan. North Korea would impose this due to Japan’s history of brutal colonial rule over Korea and its historical disputes with Seoul.

This speculation is supported by the fact that last month, Kim Jong Un proclaimed in a speech to Parliament that he is proceeding to harden the nation’s nuclear doctrine and would maintain active nuclear weaponry for as long as the U.S. and South Korea maintain their joint military drills. It has been a few weeks already since the United States and South Korea have liaised with Japan and conducted multiple trilateral anti-submarine and missile-tracking exercises and drills. The last time the three nations joined forces in combined military drills was also in 2017. This can bring insight as to why Kim Jong Un is also escalating his missile testing measures.

In fact, just after the launch by North Korea on Tuesday, the U.S. sent four Air Force F-16 jets, and South Korea sent four F-15K jets over North Korea in a joint military drill. They fired two bombs at a target in the west of South Korea. On Wednesday, they also sent four MGM Army Tactical Missile System surface-to-surface missiles in another combined drill. The threat of the US and South Korea’s precision strikes retaliated strongly against North Korea’s less accurate location targets for its missiles.

These test missiles will surely see an increase in defense spending on behalf of Japan, US support, and the South Korean alliance. North Korea said it will presumably wait until after China’s Communist Party Congress occurs in mid-October to try another nuclear test. However, it seems clear Kim Jong Un is intent on proceeding.

Read here how the death of Gorbachev and his history ended the Soviet Union.

In this article:Japan, News, North Korea