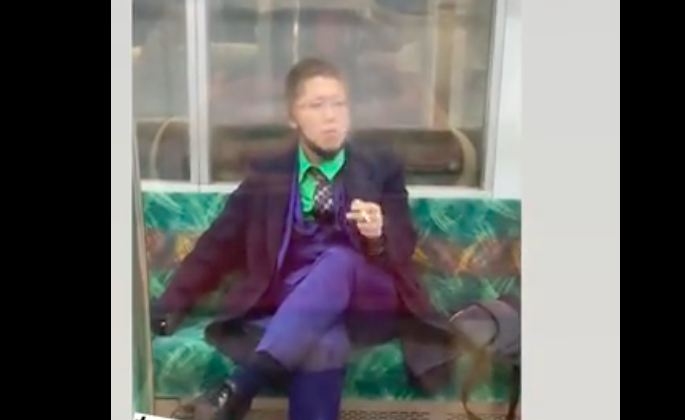 Halloween is usually a day for fun and mischief, but one man in Tokyo took things way too far on this festive holiday. A 24-year-old man named Kyota Hattori has been arrested for attempted murder and arson all the while dressed as The Batman villain The Joker.

The attack happened on the Keio express line bound for Shinjuku, purported to be the world’s busiest rail station, at around 8 p.m. It was reported that the station was busier than usual due to people going to Halloween celebrations around the cities. In one video uploaded to Twitter, you can see people fleeing from something at the back of the train before a large flame of fire appears.

Many passengers claimed to think it was all a Halloween prank at first. But once people saw the blood and the very real fire, panic ensued. The train made an emergency stop, but the doors did not open quick enough for many on the train. In some footage, people are seen desperately climbing through windows to escape the horrors inside and it was reported that cries of “Run Away!” could be heard.

In the short video above, you can see police inside the train surrounding an individual. When that man stands up you can see the purple and green suit of The Joker. Hattori critically injured an elderly man and harmed at least 16 others. While he was arrested without a fight, it has been reported that he told the police he, “wanted to kill people and be given the death penalty.”

Police also said he made comments referring to another deadly incident on an Odakyu Electric Railway commuter train in Tokyo. During this incident, a man stabbed and slashed 10 passengers amid heightened security for the Tokyo Olympics. According to Japan Times, there has been a slew of attacks on trains and in the stations lately. What the cause of this uptick in violence remains unclear at this time.

As we all approach the end of 2021 and into the holiday season, we need to remain mindful of others. The world seems crazier than normal, and maybe if we began to care more for each other, incidents like this would happen less. Don’t forget to slow down, relax, and check on your neighbors!