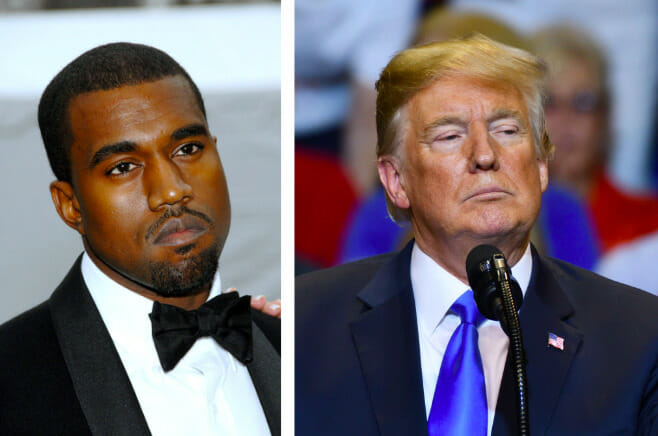 On Thanksgiving eve, Ye met with the President-Elect, posting a since-deleted video to Twitter where he called it a “Mar-a-Lago Debrief”, suggesting the pair met at Trump’s Florida estate.

The video was released on Twitter, accompanied by a series of “#Ye24” graphics – just a week after Trump himself announced that he would be running for president in 2024.

“I think the thing that Trump was most perturbed about, me asking him to be my vice president,” West said in the video. “I think that was like lower on the list of things that caught him off-guard.”

Apparently, Trump didn’t take too kindly to Ye’s suggestion that he run alongside him as Vice President.

“When Trump started basically screaming at me at the table telling me I was going to lose — I mean has that ever worked for anyone in history,” West said in the video. “I’m like hold on, hold on, hold on, Trump, you’re talking to Ye.”

A former presidential candidate himself, West unsuccessfully ran for the White House in 2020. The BBC reported that he scraped a measly 60,000 votes during the campaign (in comparison Joe Biden reportedly received 81 million votes).

West went on to ask the President-elect a series of questions including: “Why when you had the chance did you not free the January 6ers?” referring to the people locked up for their involvement in the Capitol attack.

However, back in September, Trump called the treatment of the January 6 prisoners “very unfair”, and personally called into a rally just outside the D.C. jail where they are being held to support them.

Prosecutors have charged hundreds of defendants in connection with the Capitol attack, including more than 275 individuals charged with assaulting or impeding law enforcement.

Recently, West has been caught in a storm of controversy, after he made anti-semitic comments and wore a “White Lives Matter” shirt at Paris Fashion Week. The controversies had a series of significant repercussions, including West being banned from Twitter and sports fashion giant Adidas terminating his Yeezy contract and cutting all ties with the rapper.

West went on to write an Instagram post where he reportedly lost “two billion dollars in one day“.

Earlier this week, Rolling Stone reported on the “the toxic and chaotic environment” West allegedly created at Adidas, including “verbal abuse,” watching pornography, and demonstrating “a very sick pattern of predacious behavior toward women.”

Though he has posted a series of #Ye24 graphics to his newly reinstated Twitter account, who knows if the rapper will actually run for president in 2024?

One thing which is almost certain, however, is that Trump will not be his running mate…