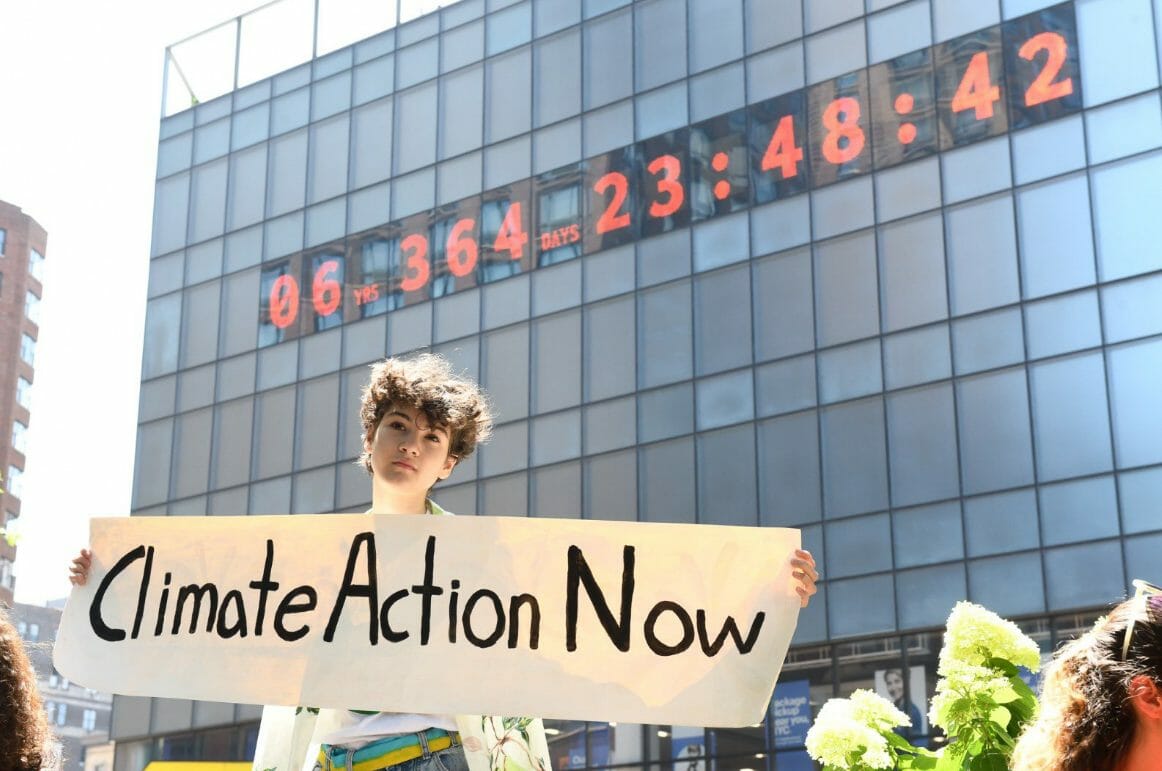 On September 19, 2020, the Climate Clock in New York’s Union Square went live. The Clock began counting down from 7 years and 102 days – an estimate of the remaining time humanity has to act on climate change and save our planet.

With the clock currently standing at 6 years 339 days until the damage becomes irreversible, it’s time to start listening to and supporting those involved in civil disobedience like Peter Kalmus. Here’s everything you need to know.

What is the Climate Clock, and how did it start?

In September 2019, Greta Thunberg gave her speech in front of the UN General Assembly and delivered a message on the importance of recognizing and responding to the current climate crisis. She wanted a clock to hand to the UN Secretary-General as a constant reminder of the remaining time to act. The Climate Clock team constructed a clock, but their efforts were dismissed. Almost a year later, the team renovated the Metronome, the time sculpture in New York City, and the Climate Clock went live just in time for Climate Week of 2020. With remarkable news coverage and constant media attention, the spotlight on the Clock is becoming increasingly important each day.

On July 22nd 2022, we celebrated Climate Emergency Day as the Clock chimed to mark 7 years until climate damage becomes irreversible. In NYC, activists held a moment of silence and called for global action. The hashtag #MyClimateResolution was trending on Twitter as users pledged to do their bit towards climate action, with many urging their local governments to recognize the emergency and use what power they had to spread the word. For many, it started with reducing their carbon footprint, and some states held their own conferences. Chuks Anyaduba, Nigerian filmmaker, humanitarian, and Project Director for Climate Clock Nigeria, made a call directly to the media to encourage people to create advocacy for climate change. The hashtag #TeachersForFutureItaly was also mentioned on the day, with many Italian teachers holding a moment of silence and reading a climate change manifesto pledging to educate today’s youth on the effects of climate change. The Climate Clock was at the forefront of everyone’s messages.

On April 6th 2022, over 1000 scientists in 26 countries risked arrest and protested to demand action on climate change. Peter Kalmus, a Climate Change Scientist for NASA, and three others chained themselves to an office building of Chase Bank in Los Angeles. JPMorgan Chase has invested more money into fossil fuels than any other bank worldwide. Kalmus was arrested, and the protest received very little media coverage. In London, 25 peopled glued scientific papers to the UK Department for Business, Energy, and Industrial Strategy windows. In Spain, protestors threw fake blood on the Spanish Parliament steps, and around 26 people were arrested. The events bare a scarily similar resemblance to the satirical film released last year, Don’t Look Up. Read about Catherine Campbell’s coverage of it here.

Peter Kalmus shared his thoughts on TikTok following the arrest. He noted,

‘I was kind of surprised by how much social impact this seems to have, so that tells me that climate disobedience is probably a very, very good path forward for the climate movement, and I hope to see more of it’.

While he recognizes that this is the best way forward, he warns that joining communities, assessing personal damage, and speaking to loved ones must be considered before engaging in rebellious protests with the risk of arrest. Nevertheless, he encourages breaking through social stagnation and engaging in climate disobedience with local communities to promote and fight for change.

His account importantly sheds light on topics rarely covered by mainstream media. He asks users to support the Scientist Rebellion movement to encourage urgency, cultural and political shifts, and systemic change. Holding celebrities accused of being ‘Climate Criminals’ accountable is certainly one place to start. Instilling a real sense of change and having gained 248k followers, his message is being heard and believed in.

August 8th 2022 marked the Climate Clock team’s launch of the hashtag #NewsfeedOfHope. Their tweet announced that they would give bimonthly updates on positive climate news worldwide. Many users supported the series and argued that showcasing significant solutions would allow them to be upscaled and replicated on a mainstream level.

The first news in the series included sharing the BBC’s recent coverage of NASA’s new system to map forests with lasers from the International Space Station to accurately assign carbon emissions. With greater accuracy, forest loss can be tackled more efficiently. The Climate Clock account also shared the news that ‘figures from the Department for Business Energy and Industrial Strategy’s showed that almost 40% of Britain’s electricity in 2021 was provided by renewable sources, making it the second highest year on record for clean power generation’.

Introducing our #NewsfeedOfHope series – a bimonthly update on #ClimateSolutions, great ideas, and good news for our planet. At a time when our newsfeeds are flooded with alarming climate news, we wanted to save some space for the positive stories – because hope matters pic.twitter.com/T2cwXq4nqa

They also shared the news that an indigenous Shuar community in Ecuador has won a decades-long battle to protect their land from deforestation and pollution threats. The news comes as World Indigenous Day was celebrated on August 9th. The Climate Clock Instagram highlighted the preservation efforts of indigenous people and their celebration of the environment. 2 days later, Instagram took the opportunity to spotlight youth activists leading the fight for climate justice on International Youth Day. They wrote, ‘in our opinion, one of the biggest issues for youth today is the fight against climate change, which the youth is an essential part of. And today, we celebrate those involved for their passion, determination, and hope’.

On August 11th, the Climate Clock took center stage at the Brazilian Climate Change Conference. Discussed were the risks to the country and planet that come alongside taking no action and reassessing previous commitments from a sustainable perspective. Accompanying huge conferences like this, as well as the COP26 summit in Glasgow back in November, shows the importance of the Clock in drawing real attention to the time we have left. Climate Clock teams all around the globe have been making their own clocks, standing together, and urging governments to act.

So, what can you do? Keep up with the Climate Clock by following their social media platforms and opting for updates. Share content that resonates with the movement using the #ActInTime hashtag. Add a clock widget to your website or join the waiting list to receive a physical countdown clock. Encourage your local government to display the clock, join local communities passionate about change, and follow scientists spreading the word like Peter Kalmus. Every little effort helps, and it starts with the Climate Clock. Time is running out to save our planet. Act in time.