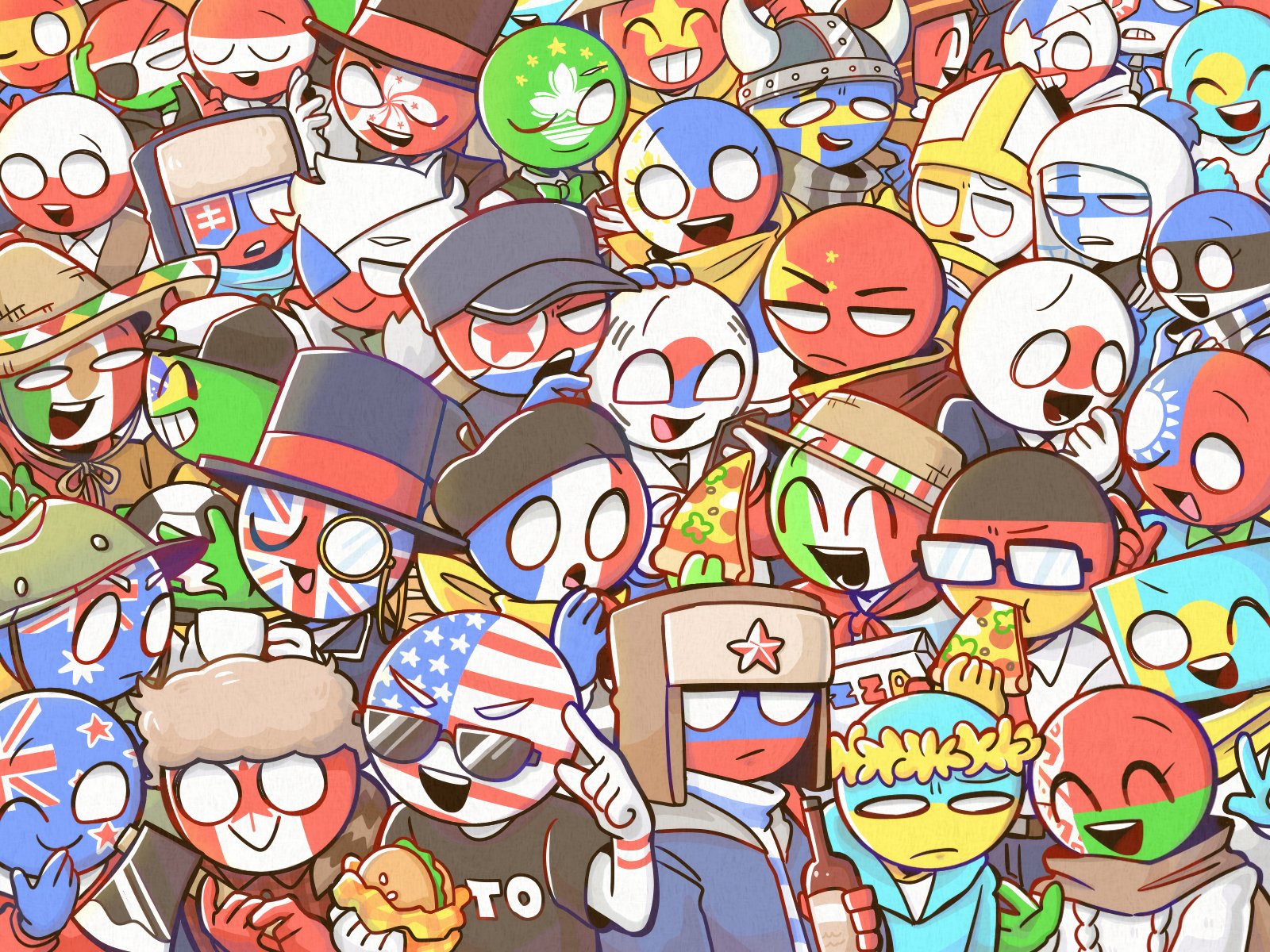 Fandoms are some of the best communities to be found online. If you’re a nerd about anything, by being in a fandom, you can engage with millions of like-minded people. You can also express your love for a game, series, anime, or comic through fanart, fanfiction, roleplaying, cosplay, and even creating music dedicated to whatever you’re obsessed with. However, some fandoms gain notoriety for being incredibly toxic. Possibly the most toxic fandom on the internet is also the most bizarre one. It’s not a fandom dedicated to any published media. This fandom is called ‘Countryhumans’, and the name itself is pretty self-explanatory. This fandom is entirely based upon taking actual countries and personifying them. But why exactly is this fandom so controversial?

CountryHumans is a fandom based upon humanizing countries, which are typically portrayed as spherical heads bearing the country’s flag with a human body. Countryhumans, as a concept, is very similar to that of Hetalia, a popular online manga and anime which personified the axis and allied power countries of WW2. The fandom itself is mainly focused on the countries and shipping the countries with each other. Just as with Hetalia, the biggest criticism of the Countryhuman fandom is that by condensing an entire country into just one singular person, the countries’ personalities are incredibly stereotypical and racist.

The racism in the fandom only gets worse the more you look into how certain non-white countries are personified and which countries are the most popular amongst fans. The ‘favorite’ characters are the United States, Canada, The United Kingdom, France, Germany, Russia, Poland, Japan, and China. Clearly, most of these characters are based on predominantly white countries. Before the Countryhumans’ fandom page was taken down, there were descriptions of each country’s personality. When it came to African and other non-white countries, there were very few represented and significantly less information was available on their profiles, compared to extremely white countries, such as Great Britain or Russia. The information given for African and other non-white countries was often derogatory as it was based on incredibly racist stereotypes.

YouTuber Izzy (@Izzzyzzz) made a video where she delved into why Countryhumans has become dubbed ‘the worst online community’.

As with every fandom, shipping is a huge factor

‘Shipping’ is basically rooting for two characters to be in a romantic relationship with each other. Shipping is a massive part of every fandom, however, it’s commonly agreed that shipping real people is not okay (such as actors or YouTubers). But what about shipping real countries? In the Countryhumans fandom, by shipping countries together, these relationships are controversial as it brings up actual international relations between countries. Ships are usually based upon countries that were allied to each other in war or even countries that were at war with each other. Not only this but the shipping art produced by the fandom has been criticized for fetishizing LGBTQIA+ people, as most of the ships are predominantly same-sex couples. The sexual and romantic media produced by the fandom propagates harmful stereotypes about LGBTQIA+ relationships, as it heavily sexualizes gay men for fans to obsess over.

On top of the shipping, making characters out of countries means you must address or somehow include the history of the country.  This is specifically shown in the case of Germany and Russia, where the fandom covers the very dark histories of these countries in all the wrong ways. There is a vast amount of fanart depicting humanized versions of Nazi Germany and the USSR which, for obvious reasons, is far from okay. Making ‘cute’, ‘funny’ or romantically orientated art concerning these countries and these incredibly sensitive topics is incredibly humiliating and disrespectful to the victims of WW2. Making light of such atrocities, by humanizing them, is belittling worldwide tragedies.

Between having racist characters, fetishizing LGBTQIA+ people, and making light of wartime atrocities, it’s safe to say that this fandom is incredibly toxic and controversial. But that’s not to say that everything about the fandom is bad or that everyone in this fandom is a bad person. As with every fandom, there are always negative elements. However, the negative elements of Countryhumans are so extreme and racist, that it’s easy to see why the fandom has gained such a strong backlash.