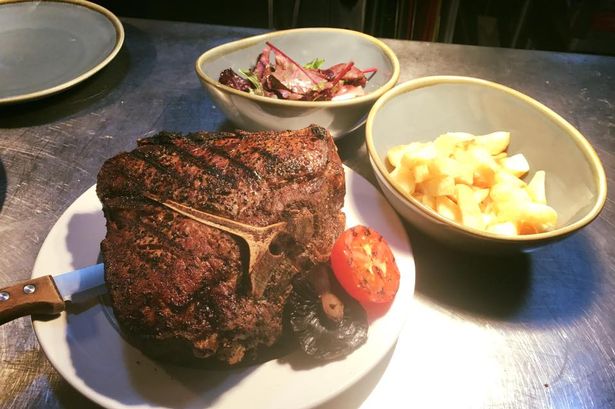 Eating challenges are often seen as a primarily American pastime. However, this isn’t exclusive to the United States. Over the past few decades, the United Kingdom’s list of eating challenges grew by leaps and bounds. A recent and notable addition to that trend: a 96oz steak, available at Bristol’s own Ashville Steakhouse.

Six pounds of meat may intimidate the inexperienced (including this reporter). However, other eating challenges around the world revolve around steaks of the same size. What makes this one different, and more difficult, is everything else on the plate. Challengers have an hour to finish not only the steak, but also their choice of five sides. If you miss so much as a single homemade triple-cooked chip, you pay £110. If you succeed, you’ll actually leave the building £50 richer.

Sandor Marton, owner of the restaurant for the past three years, delved into the challenge’s origins in an exclusive interview with Trill! Magazine. He first introduced steak to the menu back in October 2016 with a 22oz T-bone. It proved surprisingly successful with customers. “I decided that I would then go bigger and introduced the 36oz, and that had an even bigger response, simply because of its size. Over the past few months of this year I decided to test the water a bit and go bigger and bigger until one day out of nowhere I had a thought about doing a challenge.”

Marton wasn’t talking about the one in today’s headline. Almost a year ago, the restaurant, then called simply The Ashville, offered a different challenge with a 72oz steak. The smaller cut size doesn’t mean an easier contest. For one, the steak is slathered in two kinds of sauce. For another, contenders also had to eat triple cooked chips, grilled tomato, mushroom, salad, vegetables, onion rings, and garlic bread. To top it all off, they also had to down a pint of cider or lager.

All these extras may be why the “ten or eleven” people who tried couldn’t beat it. Marton decided the next challenge would “go bigger with the steak itself but maybe limit some of the garnish.” That means that even though this new challenge has an extra pound-and-a-half of meat, it shouldn’t be as difficult.

This just leads me to wonder: why are people so drawn to eating challenges? Why do we have things like Man v. Food? I asked Marton, who would know better than most. His answer: “I think it’s something different for people to do.” Makes sense: eating is a mundane activity, but eating this much is unusual and therefore interesting. He also gave an answer that should have been common sense to me: “it’s just a bit of fun.”

Regardless, Marton’s high-stake steaks successfully put his diner in the public eye. The item introduced only last year now dominates the menu, and Marton even renamed the restaurant for it. After starting two challenges in less than a year, Marton isn’t thinking about going even bigger just yet. “I don’t know if I will introduce a bigger steak just yet … but who knows what the future holds.”

Interested in another eating challenge? Here’s a story of one that McDonald’s is running.