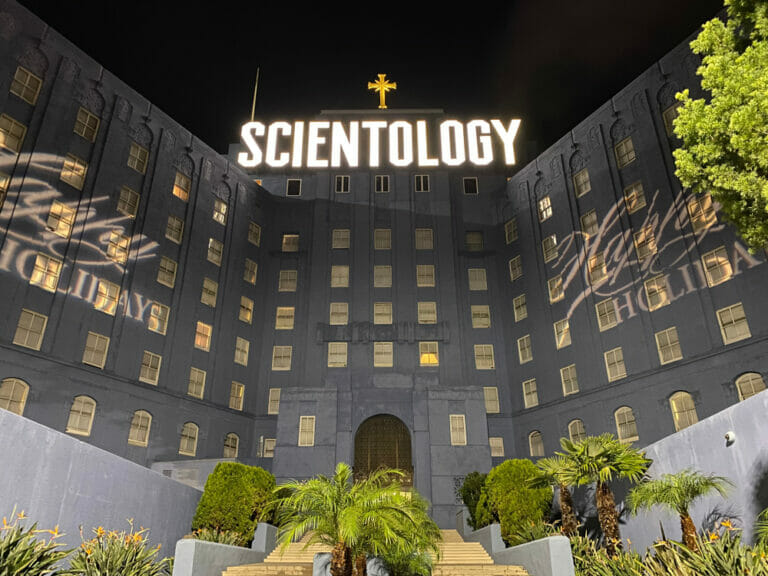 Over the years, Scientology has come to be associated with a religious cult popularized by many Hollywood celebrities. We take a deep dive into what Scientology actually is, the controversies surrounding it, and celebrities who have both remained and left the community since its boom.

Scientology is a spiritual belief that offers its followers a path of true knowledge. This ‘knowledge’ relates to one’s own self and the ability to heal the mind. The belief was founded by American author L. Ron Hubbard in the 1950s.

In his book ‘Dianetics’, Hubbard explains that individuals have the power to cure themselves physically and mentally by separating the ‘reactive’ mind from the ‘analytical’ mind. Essentially, it refers to training the mind to rely on a higher level of thinking and less on impulses.

Scientologists believe that humans are immortal and live in multiple bodies throughout their spiritual life. Using Dianetics, individuals aim to cleanse their past traumas to achieve true enlightenment.

Scientology had a revival since the early 2000s, becoming one of the fastest-growing modern religions of the 21st century. The question remains, was this boom due to genuine belief and interest, or the community’s intense and aggressive recruitment of new members?

Who Joined, and Left, Scientology?

The most famous Scientologist is Tom Cruise who is known for donating millions to the community.

Cruise’s ex-wife, Katie Holmes, was also a notable Scientologist but has since left the church. Holmes has scarcely spoken on her experience but divorced Cruise out of fear of their daughter growing up in the Scientology community.

Another celebrity with ties to Scientology includes Handmaid’s Tale star, Elizabeth Moss. This carries a level of irony, with Moss’s character, Offred, fighting against oppressive powers in a dystopian world. Moss has not revealed much about her beliefs other than that she has been in the community since her early teens.

Famously, John Travolta also remains a part of the Church but has distanced himself from it in recent times. While Travolta has never confirmed the details, it is believed that his decision to step away followed the passing of his wife, Kelly Preston, in 2020. Travolta thanked various medical centers for helping with her treatments, condemnable in the Church of Scientology which does not believe in seeking medical treatments such as chemotherapy.

Other members who were a part of, but have now formally left the Church are Priscilla Presley, Orange is the New Black star, Laura Prepon, director and screenwriter, Paul Haggis, and American actress, Leah Remini.

Remini was the most vocal about splitting from the church, speaking about the abuse it inflicts on its members. The actress wrote about it in her 2013 memoir, Troublemaker: Surviving Hollywood and Scientology.

Later on, Remini teamed up with former high-ranking Scientologist, Mark Rinder, in a docu-series exposing the church. The Emmy-winning series, Leah Remini: Scientology and the Aftermath, spoke with people who have left the church and the abuse, harassment, and threats they received. The series shed light on the sinister side of Scientology and why the community is so secretive.

Is Scientology a Cult?

The short answer is – yes. Part of the religion’s mystique is its elitism, to have any authority within the community requires extreme wealth. The powerful celebrities tied to its name have helped the Church to recruit on a mass scale, providing prospective Scientologists with delusions of grandeur.

Like any cult, Scientology claims to solve the impossible. Eternal life, no pain or suffering, immense power. Using these promises, the church reels in new recruits with various seminars and promotional materials.

The number of Scientologists has dropped over the last decade, declining 23% in the UK since 2010. The few that have escaped from the community and come forward are one of the only reasons we have a better understanding of Scientology today and its cult-like nature.

An Endless Stream of Controversies

There are numerous controversies surrounding the world of Scientology, but a few stand out.

Perhaps the most famous is the disappearance of David Miscavige’s wife, Shelly Miscavige from the public eye. David is the current leader of Scientology and his wife mysteriously stopped appearing in public in 2007 after being a leading figure in the church herself. Many speculate that Shelly was banished to one of the church’s many secret bases, although the reasoning for her banishment remains unknown.

Ex-Scientologist Leah Remini made attempts to report Shelly as missing, but her worries were disregarded by authorities. Nonetheless, Shelly’s whereabouts have not been known since 2007.

The second controversy is just why so many celebrities joined the religion. The world went from never having heard of Scientology, to suddenly hearing about it everywhere in the early 2000s to mid-2010s. Hubbard always made it his mission to put celebrities at the forefront of Scientology, branding it as ‘Project Celebrity’ in 1955.

Ex-Scientologist Marc Headley reported that they were made to churn out as many as 50 PR videos a year to show its members how positive the church is. This was a key recruitment strategy, as the church would host auditions and then reel in the actors using their highly produced propaganda.

Finally, Scientology has a reputation for being highly aggressive and reactionary toward anyone who speaks out against them – building on the cult-like image it already has. This has its origins in Hubbard’s own policy, ‘The Fair Game Policy’ which states that anyone declared enemies of the church can be denied property, sued, or even injured. To this day, the policy remains protected as religious expression.

In this article:Featured, Interesting, Scientology