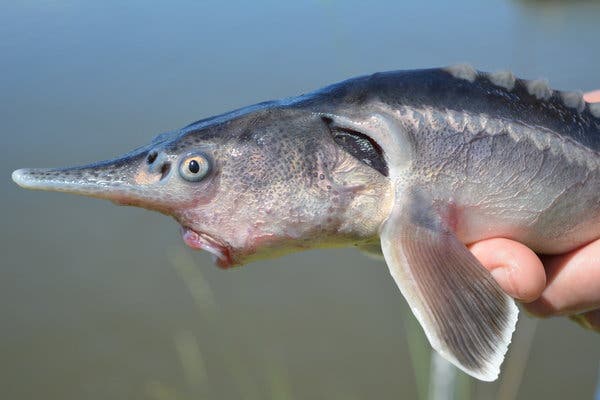 You definitely haven’t caught a sturddlefish on Animal Crossing…

Scientists in Hungary have accidentally created a brand new fish, a cross of the American ‘paddlefish’ and the ‘Russian sturgeon.’ Both the paddlefish and the Russian sturgeon are endangered species. The new fossil fish named the ‘sturddlefish’ was tried by using a process called gynogenesis, which allows for asexual reproduction. The result came as a surprise for scientists and researchers.

With both of its parents being endangered, evolving separately for 184 million years, it means their last common ancestor was in the Jurassic period. The sturddlefish has inherited the appetite of its Russian sturgeon mother and the long snout of its Paddlefish dad.

It seems extremely unusual for these two types of fish to come together. With the American paddlefish exclusively only being found in the United States, and the Russian sturgeon living in areas of Eastern Europe like Russia, Bulgaria, and Georgia, their meeting makes their creation even more fascinating.

Speaking to The New York Times, Dr. Attila Mozsar, a study co-author and senior research fellow said that he and his fellow researchers believe that like other man-made hybrids, like the liger, the sturddlefish is most probably sterile.

The scientists had not intentionally been trying to create a new hybrid. Instead, they wanted to breed both species separately for conversation reasons.

There is currently no plans to recreate sturddlefish anytime soon.

Check out another unusual fish here.