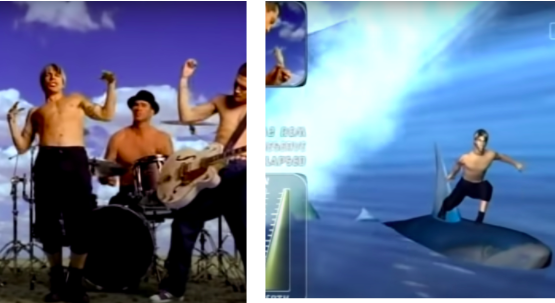 It’s been more than 20 years since Red Hot Chilli Peppers first released their ‘Californication’ album in 1999, with the music video from its titular track centering around a made up video game.

In 2000, the music video for ‘Californication’‘s title track was released as a single, and the music video featured a janky looking 3D video game that resembled PlayStation graphics at the time.

Californication (the game) recreates these graphics, except now you can play through the music video’s graphics like a game.

Check out the original music video below:

After all these years, and several generations of video games, nobody ever thought to turn this iconic music video into an actual playable game – until now.

The original video, which was directed by Jonathan Dayton and Valerie Faris (Little Miss Sunshine), was inspired by several PS2-era games, like Grand Theft Auto and Gran Turismo.

But thanks to Miquel Camps Orteza, you no longer need to dream of Californication (see what we did there?), as the developer has created a fully-fleshed-out game inspired by the original video.

Orteza has uploaded the game to itch.io, an indie game platform, and it is completely free to download on PC and Mac!

Check out the trailer for the game here:

‘Do you remember the Californication video from Red Hot Chili Peppers? I wanted to play that game so bad! It’s 2022 and I haven’t seen anyone make the game, so I challenged myself to create it. I have selected some epic moments from the video and turned them into seven levels, each one with different game mechanics,’ the game’s description reads.

‘The game doesn’t contain music, you can find some buttons in the game with some YouTube links to play the official Californication song or some covers if you want to play on streaming,’ it adds.

According to Orteza the game started as a two-day challenge but quickly transformed into a full game that features 7 different levels, each with its own settings and mechanics.

If you’re a Red Hot Chilli Peppers fan and want to live out your childhood dreams of playing the game, check it out on itch.io now.

Why not check out this fan-made sequel to the classic PS2 game The Simpsons: Hit and Run too?