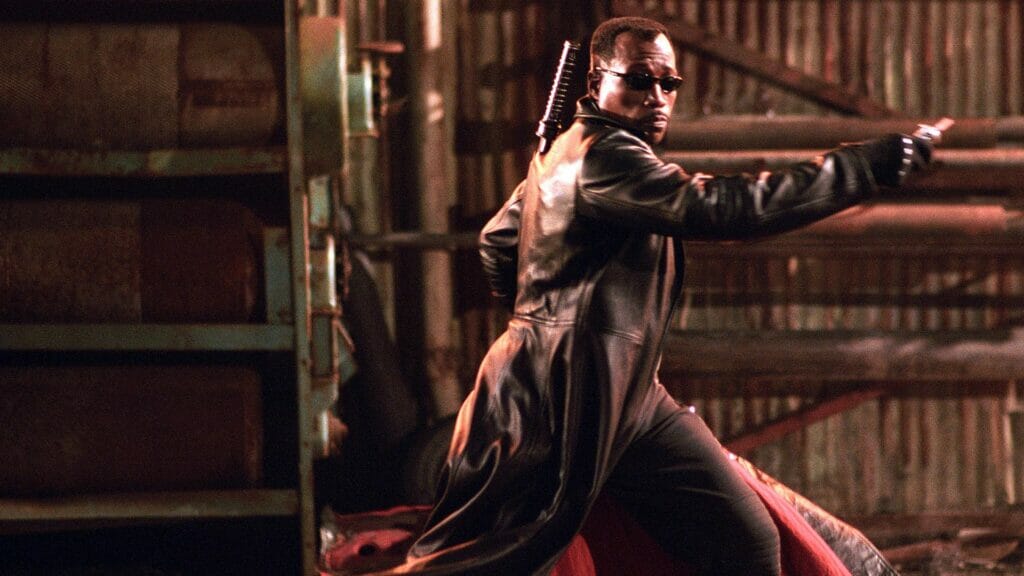 The MCU has dominated the cinematic landscape for a decade now, ever since the first Avengers movie. Almost all of its movies have shown an overall self-aware tone that makes light of the more ridiculous aspects of comics and superheroes. Back in the 90s, and before the release of Iron Man in 2007, this wasn’t the case.

The Importance of Tonal Consistency

1998’s Blade was the first successful Marvel superhero movie. Many people cite 2002’s Spider-Man as the trendsetter but Blade actually pulled Marvel back from the brink of destruction. It starred a black superhero far before Black Panther appeared on-screen and I feel like the character should be recognized for this a lot more.

Blade was originally a generic white vampire hunter, but Wesley Snipes’ totally redefined what the character looked and felt like. His Blade became so popular that he was rewritten to match what we see in the movie. The MCU’s Blade, soon to be played by Mahershala Ali, wouldn’t be wearing sunglasses and a black coat if it wasn’t for Snipes.

MCU movies nowadays cut off deep moments and make sure that they don’t really set in, a precedent set by Joss Whedon’s writing style. The worst example of this was Thor: Ragnarok. The destruction of Asgard, Thor’s home, was played off as a joke despite being one of the most character-defining moments for him. It’s why Love and Thunder crashed and burned too. There was absolutely no seriousness to it.

The first two Blade films unapologetically oozed with style: sunglasses at night, face tattoos, and trench coats over bulletproof vests. Not to mention the fact that he carries a katana on his back at all times. What made it all work is that nobody in the film pointed it out or joked about it; if they did it would ruin the immersion completely. Audiences would laugh at the movie instead of with it. The moment where Blade “powers up” just by putting his sunglasses on is funny, but in a way where you cheer alongside it instead of thinking it’s out of place.

The Matrix has a similar aesthetic to Blade. It was just the 90s action movie look. Everyone wears sunglasses, everyone wears black, and every actor in these movies had some form of karate training. The fight between Morpheus and Neo was all wires and choreography. Keanu Reeves and Lawrence Fishburne had bruises on their arms from blocking punches. Going back to Blade, Wesley Snipes was a black belt in Shotokan before ever getting into acting.

The practical effects and stylish action also made these movies stand out compared to today’s CGI fests. The Matrix and Blade don’t age because people are really performing these stunts on screen. The CGI is obviously old, but these films will probably hold up forever.

The best modern films and TV also rely on practical effects for a reason. The Demogorgon from Stranger Things, for instance, isn’t CGI at all. In my opinion, this will probably give Stranger Things the same iconic, immortal feel years later that 90s films have now.

Costumes Should Be Cool

One of my personal favorite directors has always been Guillermo del Toro because he retains his distinct look and feels throughout all his films. I fell in love with his style when I first watched Hellboy. This is far more quippy than the films I mentioned above, but it can’t really be called self-aware. It’s comedic but not to the point where they stop the film and wink at the audience. Also, every character shares a different dynamic, some of which aren’t funny at all. The romance between Hellboy and Liz has zero jokes which make it come off as 100% sincere.