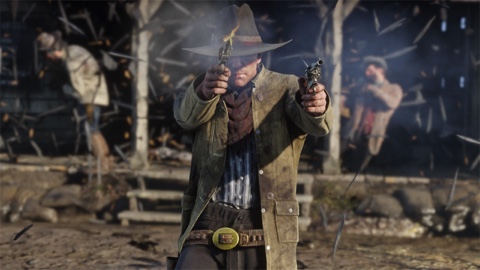 The wait is finally over, we now know when we are getting the next installment of Rockstar’s other epic open-world game – Red Dead Redemption 2. Get the date in your diary, the 26th of October 2018 will be the day that we are graced with this pistol-wielding, horse-galloping phenomenon and it seems like SO far away. However, we may have something to get you even more excited.

Rockstar has released barely any information about the game but now Trusted Reviews are claiming they have been handed a leaked document, revealing some key details regarding missions, online gameplay, mechanics, and story. With RDR2 having been delayed already, leaving many fans frustrated, this is just the thing to tick everyone over until its release.

Here is a rundown of everything leaked, provided by Trusted Reviews:

Excited yet? This better be worth the wait! It definitely sounds like there has been a lot of development time in making this game, with massive upgrades to online gameplay and unbelievable graphics. Rockstar look like they are going to deliver the goods again. Take my money!

The Western genre is seeing a real revival at the moment, from new games to some of the biggest TV shows in the world like Westworld. Have you seen the trailer for season two? WATCH HERE.