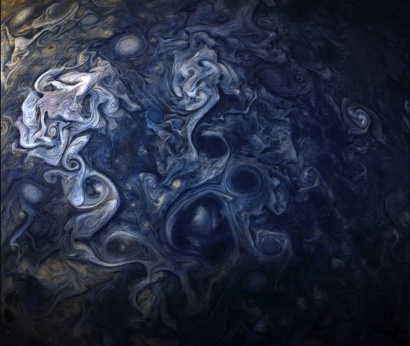 These photographs of storms on Jupiter look very much like Van Gogh’s Paintings!

Launched in 2011, Nasa’s Juno spacecraft has been working to uncover the secrets of our biggest planet. Last year, it managed to capture some extraordinary shots.

Colossal reports that the photographs look like painting by Van Gogh with blue and brown swirls of gas. Pretty amazing stuff!

Each pixel in this image equals 7.75 miles which is pretty hard to get your head around!

Because of the Juno-Jupiter-Sun angle when the spacecraft captured this image, the higher-altitude clouds can be seen casting shadows on their surroundings. The behavior is most easily observable in the whitest regions in the image, but also in a few isolated spots in both the bottom and right areas of the image.

For those artsy people amongst us, Nasa has posted a range of royalty-free images for you to admire the planet in all its glory.

How about a whole different outlook on outer space?