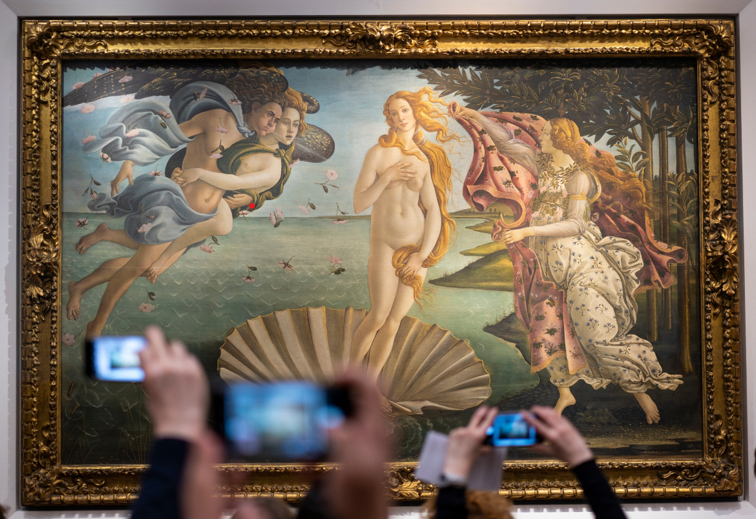 Throughout history, the female body has been sexualized, empowered, victimized, and adored through sculpture, paintings, and film. From the Venus de Milo, The Birth of Venus, and paintings of Mary Magdalene to the Bond girls and Marvel’s Black Widow, the ideal female body has stood the test of time. Though, modern art like TikTok artist Hannah Jane Martin’s, Her, a beautifully raw sculpture of the female figure, may suggest a change in the way the body is represented.

Around 150BC, the Venus de Milo was created by Alexandros of Antioch. At a time when female goddess nudity was not heroized but eroticized, it is no surprise that her naked breasts are on full display. As the goddess of love, desire, and beauty, it seems apt to describe this sculpture as the ideal female body at the time. Traveling forwards, Botticelli’s The Birth of Venus in the mid-1480s, and Tiziano Vencelli’s depiction of Mary Magdalene in 1531, both use the classical Venus Pudica pose in which one hand attempts to conceal her breast, one concealing her pubic area. Very sensual and feminine, their classical rounded facial features and voluptuous red, gently curled hair, paired with the Pudica pose, capture the unchanging female body. Though 1630 and 1681 years between them and the Venus de Milo, it seems like no time has passed at all.

The Bond Girls and Black Widow

In the 20th century, the persistence of the body type was portrayed in the film poster for the first James Bond film in 1962. The first woman is depicted with the same contrapposto stance as the Venus de Milo sculpture, emphasizing the curvature of her body. Likewise, as Venus does, the second woman wears a towel, concealing her body though displaying an erotically hidden figure. The continued use of the Ancient Roman ideal female body represents a strong permanence of the vulnerable, barely clothed woman.

Marvel’s portrayal of Scarlett Johansson’s character Black Widow has seen significant changes through her seven appearances in the franchise. In her interview with Collider on the Black Widow film released in 2021, she explained, ‘you look back at Iron Man 2 and while it was really fun and had a lot of great moments in it, the character is so sexualized, you know? Really talked about like she’s a piece of something, like a possession or a thing’. It is undeniable that her character’s outfit has changed over the years. Her first appearance featured her tight black-cat costume, long red curls similar to Mary Magdalene, an hourglass figure, and until Avengers: Infinity War in 2018, her cleavage was always slightly on show. In her three latest appearances, her suit covers her body, and Johansson notes the sexualization of women in film is ‘changing now. Now people, young girls, are getting a much more positive message’.

Hannah Jane Martin: The Future of The Body in Art?

Modern art seems to represent this changing portrayal of women and their bodies. I spoke to artist Hannah Jane Martin who has been documenting the journey of her sculpture of the female figure ‘Her’ on TikTok. Asking what inspired her to create the piece, Hannah told me, ‘what drew me personally to the torso was that I feel it has a certain helplessness in it. In removing the arms and legs of a figure, it becomes vulnerable and powerless, and yet it still holds so much beauty and emotion’. The similarity to the Venus de Milo with no arms is undeniable, though it is this piece’s destruction that makes it so beautiful. Hannah explains ‘the body holds trauma and bears scars and I think that psychological wounds, as well as physical ones, can be felt keenly in the torso’.

Speaking to me about the journey this piece has undergone, Hannah told me, ‘I think that the real art is in the process and responding to the art as it grows’. She explains the construction process of applying black soot-like paint, duct tape, epoxy, wax, white paint, and candles. It is as if the body had been damaged, scarred, healed, and grown. Explaining the interior candles, Hannah told me ‘I decided to add candles and interior lighting to the piece because the inside of the sculpture was filled with all these beautiful jagged edges and broken pieces, and I really felt like it represented the way that a lot of women experience heartbreak and trauma yet still find inner light’. A single black candle remains unlit in the center of Her, which Hannah explains represents ‘my darkest wounds … there are some things I’ve been through that I can’t yet accept, and so I’m not ready to light that black candle yet … I think that might be something many other women can relate to as well’.

When asked, Hannah told me the overall message of the sculpture; ‘to an extent, this piece is about objectification and how I feel that my body has been broken down into a sum of its parts and what they are used for. On the other hand, … it’s meant to be about simultaneous strength and fragility, finding empowerment in vulnerability, and discovering and resolving wounds through my artistic process. It’s also about finding gratitude for my body that has carried me through life and loving my scars’. This exploration of the body has also been explored in Persephone Kianka’s recent article on body neutrality versus body positivity.

“it’s meant to be about simultaneous strength and fragility, finding empowerment in vulnerability, and discovering and resolving wounds through my artistic process”

Hannah’s art portrays a female figure which has rarely been represented in art history. I asked Hannah whether she thought something like this would have been created in the Classical era. She told me:

“There is an idealism of the figure that exists in Classical portraits that I don’t think is present in my sculpture … I love Classical art, but I’m really drawn towards the ugly, scary, and sometimes gross part of having a body.”

When questioning Hannah about the future of this type of raw art, she told me:

“I would encourage women and other artists to dig deeper and find more within the female figure than its visual or sexual appeal because women have a lot more within them than that. Since sharing this piece, I’ve gotten an overwhelming amount of responses from women who have been through traumatic births, failed pregnancies, painful endometriosis, and countless other physical and emotional wounds. I was really struck by how many people seemed to need to see this kind of rawness in art, and I really wanted to continue sharing my work with others who need to see their pain represented.”

Hannah’s magnificent portrayal of the female body points towards a hopeful change in how women are represented in art. Her inspirational piece, Her, and its ability to touch her audience suggest a simultaneous shift in how we think about women in art and film. Its slight similarity to Venus, yet undeniable progression, produces a sculpture that recognizes the psychological journey just as much as the physical beauty of the body.