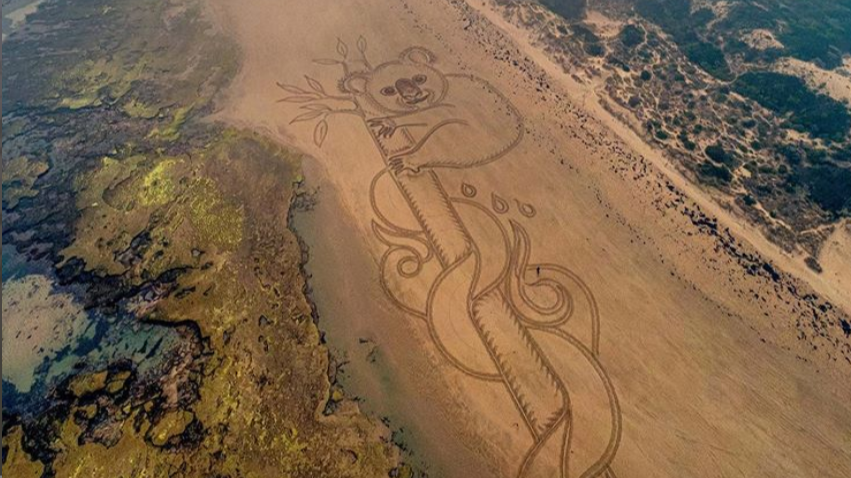 With more than one billion animals estimated to have perished in Australia’s bushfires and some species on the brink of becoming endangered, one Australian artist has drawn remarkable sand art to honour the wildlife lost in the fires.

The artist, ‘Breathe a Blue Ocean’ visited the SurfCoast and Geelong beaches when at a time when the devastating consequences of the bushfires were palpable – bushfire smoke hung in the air and obscured the sun from view. He posted the pictures and videos of the sand art to Instagram, where commenters noted the inspirational and powerful messages promoted by the artwork. The following video was captured using a drone to convey the sheer magnitude of the commemorative artwork:

These sand artworks were created using only a small leaf rake, with the artist also saying that they are guided by a “love of nature”. The artist told ABC Brisbane:

I don’t count steps or use GPS or drones to guide me. It’s a freestyle type of drawing method, I build it piece by piece.

It’s about vision and emotion and this piece was how I envisioned the wildlife in Australia’s fires.

As biodiversity experts have estimated that over one billion animals have died in the bushfires, the Australia-based artist also depicted a black brumby in sand art form, captioning the post ‘one in a billion’ to bring attention to extent of the bushfire fatalities.

Australia’s bushfires have been raging since September throughout the Austalian summer, and although rain has cooled off some fires on the eastern coast, wildlife are now threatened by flash flooding. Fires in New South Wales and Victoria are still burning and do not look like they will be stopping soon. Authorities have warned that the bushfires could intensify as Australia is only halfway through its summer.

However, the impacts of these bushfires and other environmental destruction will not be stopped with the end of summer or a dousing of rain. It is undeniable that the fires are linked to climate change and they are not the first – or last – we will see of the consequences of climate change.

You can read about how we can manage the climate crisis here.