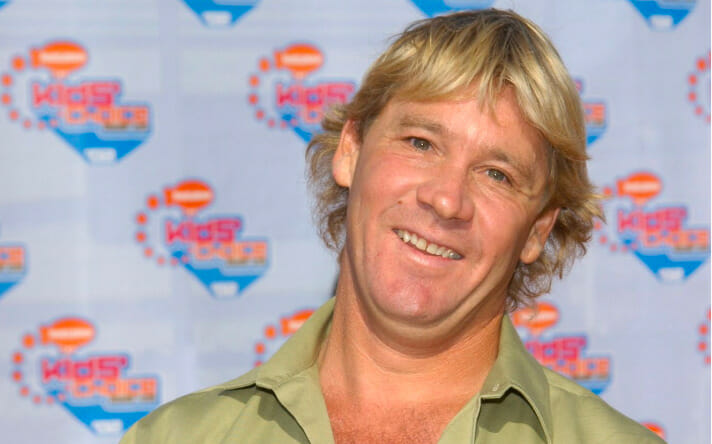 “Crocodile Hunter” Steve Irwin tragically died on September 4th 2006 after being fatally pierced in the heart by a stingray whilst filming in Australia’s Great Barrier Reef.

Steve Irwin was a legendary character who was loved the world over. The wildlife expert and conservationist became famous for his factual television shows, where he was nicknamed the “Crocodile Hunter”.

The seemingly invincible documentary host regularly came into close contact with some of the world’s most deadliest animals.

It was 16 years ago this week that Steve tragically lost his life after being attacked by a stingray whilst shooting a documentary entitled Ocean’s Deadliest on the Great Barrier Reef in Australia.

The zookeeper and television personality had one rule while handling crocodiles, snakes and sharks, and that was to keep the camera’s rolling. This meant, however, that his final moments were captured on film.

His last words on earth were captured by cameraman Justin Lyons, who has since opened up about the harrowing experience of watching his friend pass away before his very eyes.

The 44-year-old was not supposed to be out at sea that day as filming had been called off due to terrible weather conditions.

Lyon was one of Steve’s long-term crew members, and he revealed that they had been out on an inflatable boat when they spotted a massive stingray swimming through the water.

The 220lb sting ray was lying across the ocean floor, and Steve and Justin climbed into the chest-deep water to capture the magnificent creature on film.

After recording for a few minutes, Justin recalled Steve asking to secure “one last shot” before they finished filming for the day. The plan was for the Crocodile Hunter to swim behind the dangerous stingray to bag a shot of the massive creature swimming away.

“I had the camera and thought this was going to be a great shot. But all a sudden the stingray propped on its front and started stabbing Steve with its tail. There were hundreds of strikes within just a few seconds.”

The stabs came from a dangerously sharp barb at the end of the stingray’s tail, which rapidly pierced Steve’s chest, leaving him gasping for air.

Justin continued to film, not realising the seriousness of the attack until he saw Irwin was surrounded by a pool of blood. He heaved Steve back onto their inflatable boat and sped back towards the main vessel – Croc One – as Irwin writhed in pain from the venom.

Fearing that he’d suffered a punctured lung, the crew applied pressure to the massive wound in Steve’s chest.

“He was having trouble breathing. Even if we’d been able to get him into an emergency ward at that moment we probably wouldn’t have been able to save him because the damage to his heart was massive,” Justin said.

The crew rushed back to shore, but with all the panic going on, the cameras were still rolling. Possibly aware of the severity of his injuries, Steve turned to Justin and calmly said, “I’m dying” – which turned out to be his final words.

With the cameras still rolling, Justin gave Steve mouth-to-mouth for an entire hour until paramedics arrived on the scene and pronounced him dead.

The footage was handed over by the crew to Queensland Police to help with their investigations, but rumours began to circle that it would be shown to the public. However, Discovery Communications insisted the footage would remain concealed.

This didn’t stop people searching for the devastating footage online. In 2007, Australian authorities announced that they had destroyed all copies except one, which had been given to Steve’s heartbroken widow, Terri.

Terri confirmed that it had always been her husband’s desire to have his death filmed, but she said it was to much to handle and destroyed the copy without ever watching it.

“After Steve died, 100 million viewers watched a video of his death that was released on YouTube. That film was a complete fabrication exploiting people’s sadness. I have never watched the real footage. Why would I? I know how my husband died and I was relieved that the children weren’t on the boat as they usually would be; it would have been horrendous if they had witnessed it.”

Terri has since confirmed that there is still one more copy of her husband’s death sitting in a police vault somewhere and cameraman Justin agrees that that is where the last copy should stay.

“Never (should it be seen), out of respect for everyone and his family, I would say no,” he added. “I don’t know what’s happened to it and I hope it would never see the light of day.”

Steve’s two children Bindi and Robert were only 8 and 2 when they sadly lost their father. But the two are connected with Steve in many ways, as both are environmentalists and television personalities in their own right.

Robert, who is now 18, faced his own brush with death earlier this year as he was attacked by a huge 12-foot crocodile whilst filming for his family show Crikey! It’s the Irwins back in February.