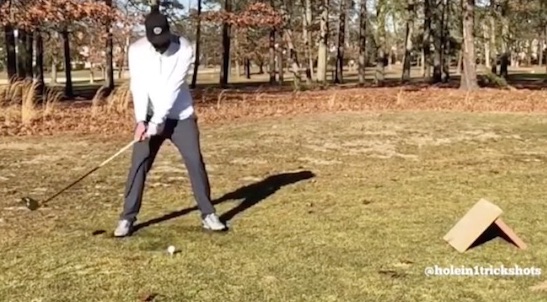 Regardless of your knowledge of golf trick shots, this is impressive. This is the kind of video you have to watch multiple times to realize what just happened. I’m not exaggerating when I say this guy is seriously talented (or extremely lucky).

Joshua Kelley shows no strain when performing this cool golf trick shot. He could not possibly make it seem any more effortless. Anyone would think that this shot was a fluke, but he is a professional trick shot artist and golfer so it’s no wonder that he is good.

It is pretty good, isn’t it? The video seems even better because you forget that he has been perfecting these skills for years. However, despite how much practice he has put in, its still better than most of us could ever do.

After watching it a few times you realize just how perfectly timed it all had to be. It must have taken so many attempts to get it just right. If he can still hit the ball after throwing his gold club in the air then imagine how amazing he would be at mini-golf! I think it is safe to say that if most of us tried this it would probably (most definitely) end in disaster.