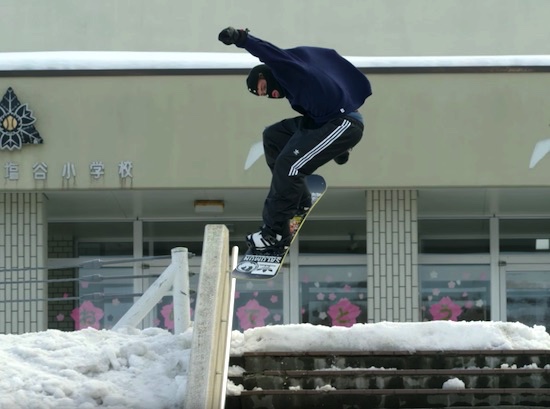 Psycho Yabai showcases the Adidas Snowboarding crew as they travel to Japan for three weeks of snow-covered mayhem.
The video is a must-see for Adidas advocates or fans of the sport in general as you see the crew display their impressive skills.

On a background of urban Japanese aesthetic, the crew on their journey enjoy the bright Japanese culture as seen through the street life (even if it is through alcohol and claw machines.) Brightly lit streets and amazing monuments also take the spotlight for the first few seconds of the video.

Then, the crew take advantage of the radical snow-covered streets of Japan. With stomach turning stunts, flips and twists and comradeship, it’s one of the most aesthetically pleasing videos to watch, even if you are not a fan of the sport.

The film crew are at the front of the action as they film close-ups of the crew gliding against barriers and snow-covered walls as easily as breathing. The sounds of the snow and the clashes of the boards against railings and the snow-covered ground clear and stylish. It is almost more intimate as we see members of the crew fail their first attempt only for them to nail it a second time. The detail the video goes into is prominent and we see barriers bend under the snowboard’s weight.

Snowboarding aside, the video also shows more laughs as the crew are seen pushing (or attempting to push) a van through the snow. So even if you are not here for the sport, at least you get a few laughs.

Check it out here:

If this video hasn’t made you fall in love with skateboarding, then this one definitely will, don’t forget to check it out!