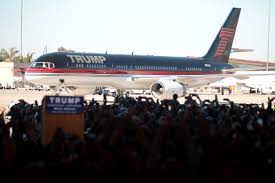 One engine is shrink-wrapped and the other has missing parts. It could reportedly cost hundreds of thousands of dollars to repair the plane, which was already 20-years-old when he purchased it in 2010.

Flight records obtained by CNN show that he has not used the plane since Biden took office in January. He has a smaller 1997 Cessna 750 Citation X corporate jet, which he’s been using since he left office.

He likes it less, though.

“The small jet isn’t his favorite,” a former White House official told CNN. “It also doesn’t have his name on the outside.”

The cost behind operating the Boeing was too high, according to the source.

“I don’t think people realized that just to get it up in the air and make one stop was literally tens of thousands of dollars,” CNN’s source said.

CNN aviation analyst David Soucie differs slightly in his opinion. He says operating a plane that size could cost anywhere from $15,000 to $18,000 hourly.

Oh, his name is also plastered across the front. Classic.