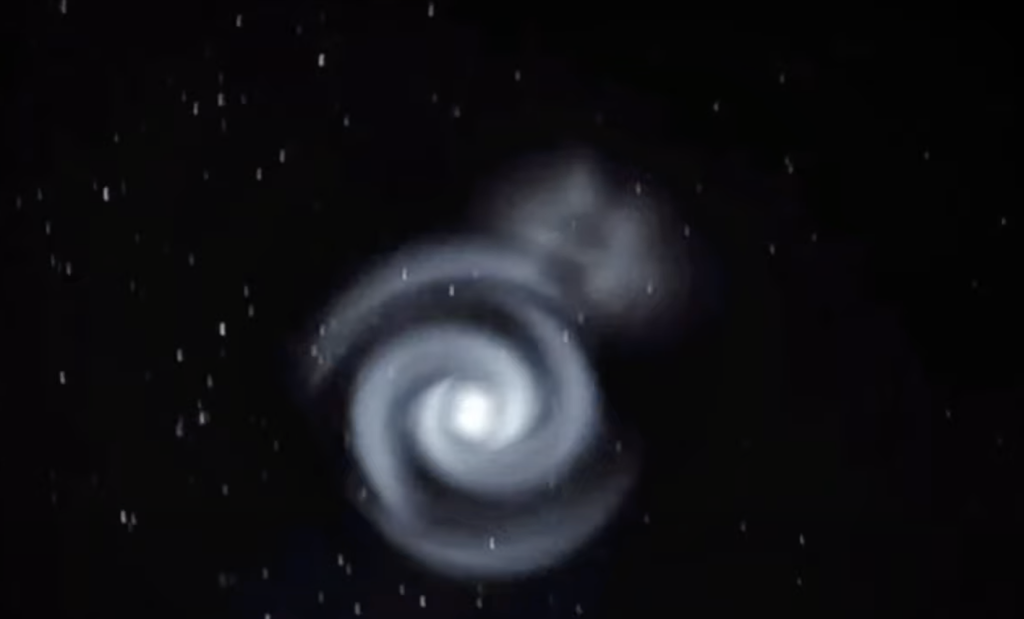 New Zealanders were left confused after spotting spirals of blue light in the night sky.

At around 7:52pm Alasdair Burns, a stargazing guide from Stewart Island/Rakiura received a text from a friend that read: go outside and look at the sky. Burns said that “as soon as we actually went outside, it was very obvious what it was referring to.”

They saw a huge, blue spiral of light. Recounting the incident Burns said “it looked like an enormous spiral galaxy, just hanging there in the sky, and slowly just drifting across. Quite an eerie feeling. We quickly banged on the doors of all our neighbors to get them out as well. And so there were about five of us, all out on our shared veranda looking up and just kind of, well, freaking out just a little bit.”

Pictures of the event covered the country’s stargazing and amateur astronomy social media groups. Numerous theories were suggested ranging from UFOs to foreign rockets to commercial light displays. One commenter suggested it was “premonition from our orbital black hole” whilst another said “aliens at it again.”

However Professor Richard Easther, a physicist at Auckland University provided an explanation saying that the phenomenon was “weird but easily explained.” He said that clouds of that nature sometimes occurred when a rocket carries a satellite into orbit. Going on to say “When the propellant is ejected out the back, you have what’s essentially water and carbon dioxide – that briefly forms a cloud in space that’s illuminated by the sun. The geometry of the satellite’s orbit and also the way that we’re sitting relative to the sun – that combination of things was just right to produce these completely wacky looking clouds that were visible from the South Island.”

Easther went on to say that the rocket in question was likely the Globalstar launch from SpaceX, which the company sent into low-earth orbit off Cape Canaveral in Florida on Sunday.

Burns, who witnessed the event guessed that it was caused by a rocket after reading about a similar phenomenon in 2009 when a Russian missile launch caused huge blue spirals over Norway. However, he still said that it was a confronting sight; “none of us had ever seen anything like that before. It was spectacular.”