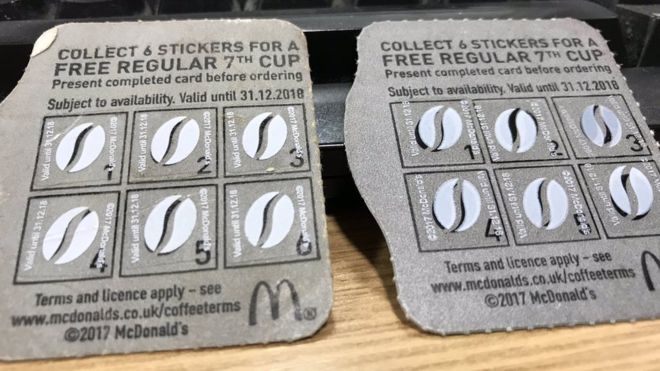 The numerous sheets of stickers featured were copies of those given to McDonald’s customers when they buy hot drinks, part of the chain’s loyalty scheme in which six stickers can eventually be exchanged for a free cup of coffee. These stickers were found by the Steerside Enforcement Team, police officers who deal with anti-social and criminal road use in Bradford when they pulled over the unnamed man for drug driving.

On Twitter, the Steerside Enforcement Team tweeted about the incident:

It is unclear why the motorist possessed these counterfeit stickers and how or if the fraud was connected to the drug use in any way. Nevertheless, for the two-fold offence, West Yorkshire Police confirmed that the man will be given a “community resolution” for the sticker fraud, and summoned to court for the drug driving.

What were the motives for the dual delinquency? Why was the mysterious motorist so desperate to get free coffee that he would resort to fraud? Would he have succeeded in his fraudulent scheme had he not been pulled over by police for drug driving? Alas, we will never know, but what is certain is that:

“Anyone attempting to use what our restaurant teams believe to be counterfeit stickers will be declined their free coffee.”

according to a spokesman for McDonald’s.

A cautious moral can be learned from this outlandish tale: do not attempt to defraud a fast-food chain’s coffee loyalty scheme, especially whilst drug driving (which is a serious offence in itself), or vice versa.