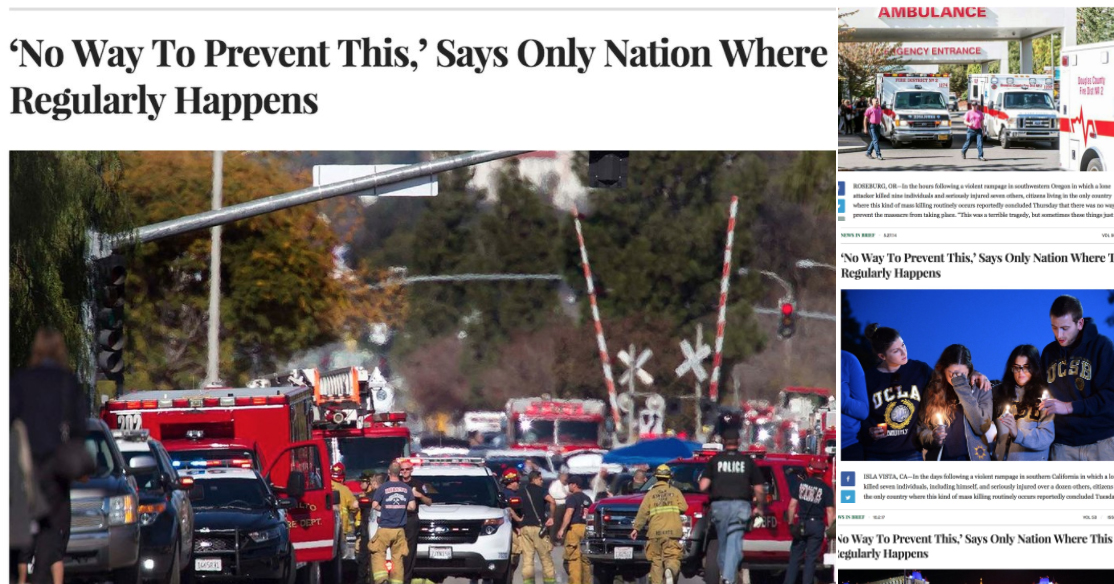 Everyone’s favorite satirical magazine, The Onion, is back with a scornful headline following the Las Vegas attack. The article reads “’No Way To Prevent This’, Says Only Nation Where This Regularly Happens”. In a gut punch to political officials, the website has run the same headline after every mass shooting for the last several years.

On Sunday night, a man on the 32nd floor of the Mandalay Bay hotel shot down into a crowd of country music festivalgoers. He was armed with multiple assault rifles. The crowd of 22,000 fled in panic from the Route 91 Harvest Music Festival as shots rang out around the Strip. In what has been labeled the worst mass shooting in US history, over 500 people were injured and 29 died.

On Monday, The Onion ran its classic article.

The sarcastic headline first began following the Isla Vista Killings in May of 2014. In this attack, Elliot Rodger, 22, injured 14 people and killed 6 near UC Santa Barbara. He then killed himself inside his car.

Since then, the facetious news source has been running the same headline after every similar onslaught. Only small details are changed each time: number injured/lives lost, date, location, and attacker name. However, the message always remains the same. A metaphorical middle finger is thrown up to those in charge: “these tragedies are just inevitable”.

Since May 2014, The Onion has run the redundant headline five times.

Many have praised these articles. After the recent post, Onion readers took to Twitter to discuss the long-standing conversation on gun control laws. The article was cited as just part of the massive amount of evidence for why change needs to happen.

The story has now been termed the “No Way Post”. It speaks about how the impasse in US politics over gun control systematically leaves Americans in danger. The article even notes that some politicians deny the connection between amplification of shootings and the amount of weapons in circulation.

Another news source, The Guardian, reported similar findings. Not only does the US have a problem of mass shootings, the gun violence in general is staggering. Shootings constantly occur in the country, growing in fatalities every time.

The second amendment of the Constitution upholds the rights of citizens to bear arms. Many politicians also support the NRA. So where is the line drawn? With mass shootings on the rise and so many lives being lost, clearly there is a need for deeper, more meaningful debate so some sort of resolution is found.

Don’t know where to start on the gun control debate? Watch South Park attempt to tackle the controversial discussion here.

In this article:article, Featured, las vegas, News, shooting, the onion