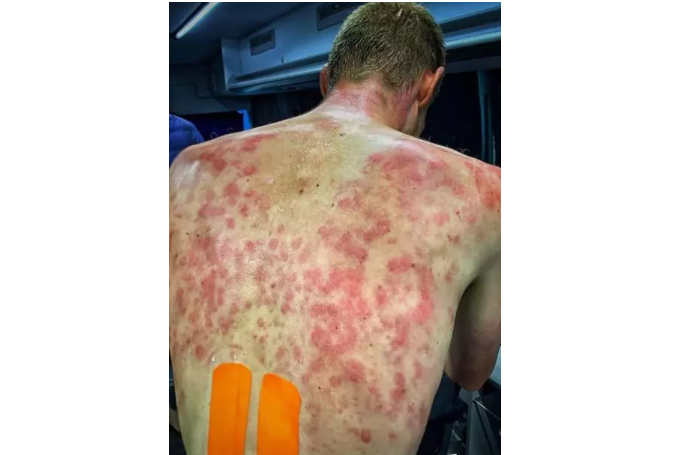 During the second stage of the Critérium du Dauphiné – a road cycling stage race – on  Thursday, 13 August, a major hailstorm battered the riders, the organizers, and the audience, forcing them to take shelter at the top of the Col du Porte.

The second stage of the race started with a day-long rainfall and bad weather, and just as contestants were a few kilometers away from the finish line, the hailstorm pelted them in full force.

Many Teams and cyclists took to social media to share pictures and videos of the hailstorm and its aftermath on their bodies.

Jared Gruber shared a picture on his Instagram saying “one of the wildest experiences in my shooting life and certainly the worst storm I’ve ever seen from one second to the next.”

Tim Declercq, a biker with Deceuninck–Quick-Step, shared photos of his bruised and battered back covered in red marks from the hailstorm on his Instagram story, shocking fans. “As if Le Dauphiné was not painful enough for the legs #hailstones,” he wrote. (featured image)

He later posted a second image showing that the red spots had started to subside.

B&B Hotels-Vital Concept also tweeted a similar picture from one of their bikers, Maxime Chevalier, showing bruised marks on his pelted back.

“Many Riders – including our boys – were hit by one hell of a hail storm,” stated Israel Start-Up Nation in a tweet that day. “worst Than anything we experienced. The scene was total chaos and mayhem. .. riders running for cover, hit hard by icy mini ping pong balls. #CriteriumduDauphine”

We hope that all the contestants and the people present are well and healing nicely.

The 2020 Critérium du Dauphiné took place between 12 and 16 August 2020 in France, having originally been scheduled for 31 May to 7 June, and then postponed due to the COVID-19 pandemic in France.

Read here, how a New Zealander cycled the postponed Tour de France – in his livingroom!